skip to main content
Return to Fordham University
You are at:Home»Inside Fordham»Fordham Welcomes ‘The Prairie’ to Rose Hill

In December 1924, the construction of a new gymnasium was completed, marking another stage in the physical transformation of the Rose Hill campus. 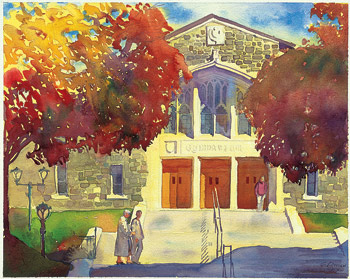 Formally opened the following month, it was one of the largest college gyms in the United States, containing a 70-foot-long swimming pool and 24,000 square feet of unobstructed playing space that would earn the building the nickname of “The Prairie.”

Known today as the Rose Hill Gym, it was seen as an investment in the performance of Fordham’s athletic teams, but also as a means for all students to obtain the “physical training [that]should go hand in hand with mental training,” asThe Ram editorialized on March 16, 1922.

The facility was one part of an ambitious building program at Rose Hill. Earlier that year, a seismic laboratory had opened at the present site of Loyola Hall, and Duane Library would open in 1927.

The first contest held in the gymnasium was a 46-16 basketball victory over Boston College. Standing-room-only crowds of more than 6,000 packed the bleachers that winter, as the team posted an 18-1 record, the best in Fordham history at that time.

Now, 85 years later, the gymnasium is still drawing praise. It was listed in USA Today in 2009 alongside legendary arenas such as Cameron Indoor Stadium and Allen Fieldhouse as one of the top 10 places for watching college basketball.