On April 25, some 400 members of the Fordham community filled Keating 1st Auditorium to hear poet Robin Coste Lewis, the University’s 2017 Reid Writer, give a talk and a reading. Lewis’s poetry collection Voyage of the Sable Venus (Knopf, 2015) won the 2015 National Book Award—the first poetry debut to do so since 1974. 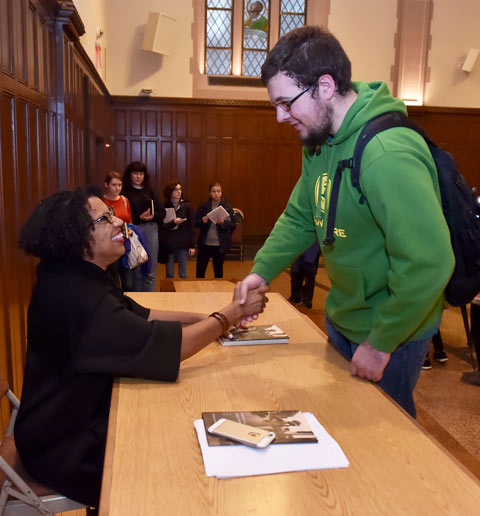 Lewis’s talk took the form of a lyric essay and covered the research methodology and process that she undertook to write the poetry collection’s titular piece. “Voyage of the Sable Venus” is a narrative poem made up entirely of titles of artworks from across centuries of Western art that feature or refer to the black female figure.

She said the idea for the project first came to her in the Metropolitan Museum of Art’s exhibit on American colonial furniture. It was there that she saw a chair whose legs consisted of carved figures of four miniature black women and whose seat was being supported by their eight arms. Soon after, she noticed that the figures of black females existed everywhere as artistic ornaments. She saw that “our whole artistic history [is] crawling with the decorative bodies of black women.”

It was not until she happened across the painting after which her poem is named that the idea for the project fully emerged, she said. She recalled how she fell in love with the both the title and the painting itself—the image of a black woman drawn by dolphins across the sea and attended to by gods, in the tradition of Botticelli’s The Birth of Venus.

She then wondered “if we went back, if we went all over the world and looked at every object, every statue, every painting that included a black female figure in any way, and wrote every title down, what would art’s epic sing then?”

Lewis talked about her research project and its methodology, which included visiting museums, churches, and courthouses in search of the black female form. Delivering her talk in a  lyric style which gave insight into the poet’s intimate relationship to her project, she described her work as “taking 38,000 years of art history and condensing it down to 79 pages.”

Following her talk, Lewis read “Plantation,” another poem from her collection, after learning that several English classes had analyzed it in their study of her work, and that it had created some debate among Fordham’s English faculty.

Lewis took a question from a Fordham student in the audience: “Why do you think this book is important? Why should I buy it?”

Calling the question “one of the best questions I’ve been asked in a long time,” she answered that she hopes the book condenses important scholarship on art, race, and beauty into a form that is accessible to readers.