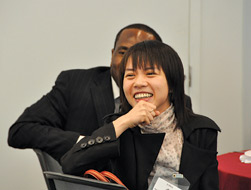 Yi Ding, Ph.D., is a new faculty member in
the Graduate School of Education.
Previously, she taught at the University
of Toledo.
Photo by Gina Vergel

For Christine Janssen-Selvadurai, Ph.D., it was the College of Business Administration’s strong emphasis on entrepreneurship that persuaded her to join the Fordham faculty. For Sophie Saint-Just, it was the University’s advanced teaching methods.

“It was exciting to see a University embrace an interdisciplinary approach to teaching French literature that involves not only literature, but film and more,” said Saint-Just, a scholar specializing in French Caribbean film who will teach in the Department of Modern Languages and Literature.

Saint-Just and Janssen-Selvadurai were among 57 faculty members, instructional staff and post-doctoral teaching fellows who recently joined the University. They were welcomed to campus on Aug. 27 as part of an all-day orientation.

The cohort holds degrees from Princeton, New York University and Vanderbilt, among other leading institutions. Their specializations include conservation genetics, evolutionary ecology, female entrepreneurship and Christian spirituality. Geographically, they hail from places as close as New England, as far as Hawaii, and farther still—such as China and Siberia.

“Fordham is on the move,” Father McShane told them. “Our ambition is that we will become a national university and a force with which to be reckoned.

“On Sunday, Fordham will welcome 1,885 freshman with an average SAT of 1249. We have made tremendous progress, largely due to my predecessor, Father Joseph O’Hare, [S.J., president of Fordham from 1984 to 2003], but also due to the work of our very dedicated faculty. They are our greatest endowment.”

“Love them,” he said. “Do not insult them with low expectations.”