skip to main content
Return to Fordham University
You are at:Home»Inside Fordham»Fordham University Press Highlights the Year of the 25th Amendment
John D. Feerick
According to Google, searches for the term “25th Amendment Trump” have spiked five times since President Donald Trump assumed office in January of this year and reached an all-time high last month. 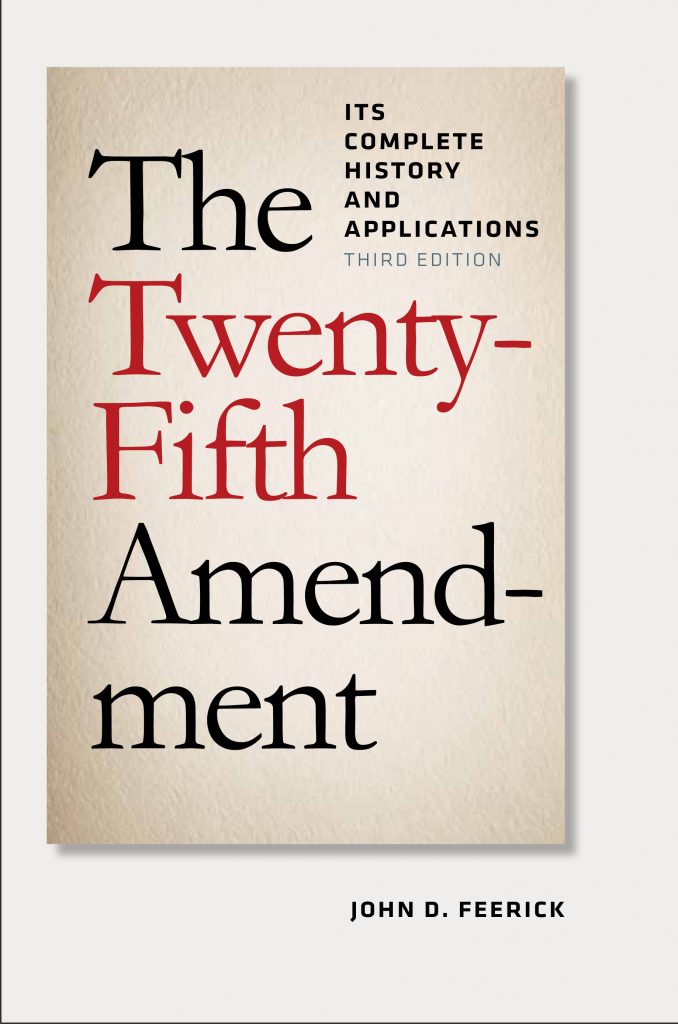 In celebration of University Press Week, Nov. 6 through 11, Fordham University Press is highlighting its 3rd edition of THE TWENTY-FIFTH AMENDMENT: Its Complete History and Applications, by John D. Feerick, former dean of the Fordham School of Law and the Norris Professor of Law.

Feerick was one of the original drafters of the 1964 amendment, which lays out the succession process for the U.S. presidency and establishes procedures for when the president is disabled or cannot fulfill his responsibilities, and when a vice presidency vacancy must be filled. The amendment has been applied in several instances, including in the appointment of Nelson Rockefeller as vice president in 1974 upon the elevation of Gerald Ford to the presidency.

The book was originally published in 1976. In this most recent edition, published in 2013, Feerick has updated his landmark study with the amendment’s uses in the past 20 years and how those uses have changed perceptions of presidential disability.

Fred Nachbaur, director of the press, said the press chose to highlight Feerick’s book to promote the Association of American University Presses (AAUP) chosen theme for the week, “#LookItUP: Knowledge Matters.” It is, he said, a theme that should resonate in an era of fake news.

“In today’s political climate the high level of misinformation and alternative facts circulating is disconcerting and dangerous,” said Nachbaur, who served as chair of the task force for the AAUP’s University Press Week. “As a group, we felt it was critical to highlight the expertise of university presses, which relies on deeply researched scholarship thoroughly evaluated by external peer reviewers and held to the highest methodological standards.”

The American Bar Association recently awarded its highest honor, the ABA Medal, to Feerick. “Throughout his distinguished career as a labor lawyer, legal educator, and public servant, his unimpeachable integrity and brilliance has made him a giant in the legal community and an invaluable aide to our government and our democracy,” said Linda Klein, ABA president.