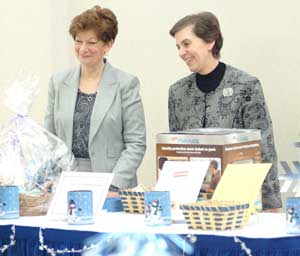 Fordham staff and faculty came together for the annual Winter Wonderland luncheon organized by the Fordham University Association (FUA) on Jan. 11in the McGinley Ballroom on the Rose Hill campus. Approximately 75 staff shared holiday stories and lunch while preparing for the return of the student population.

Vincent Dimunuco, S.J., rector of Fordham’s Jesuit community, opened the afternoon with an O. Henry story and a prayer of thanksgiving. Ann Gannon, president of FUA, handed out prizes at the post-luncheon raffle, which included tickets to a New York Knicks’ basketball game, the Westchester Broadway Theatre’s Nunsensational and the Broadway hit Mama Mia. The big winner on the afternoon was Frank McLaughlin, executive director of intercollegiate athletics and recreation, who won the 50/50 raffle.

FUA also is planning a Bring Your Child to Work day at the end of March, as well as the annual Easter Egg Hunt.