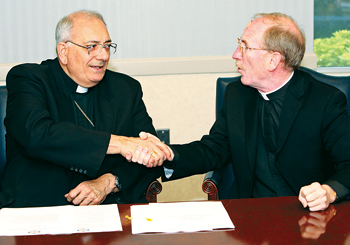 Bishop DiMarzio and Father McShane signed a Memorandum of Understanding on May 25, officially establishing the Catholic School Accreditation Association.
Photo by Bruce Gilbert

Brooklyn Catholic schools have a new way to earn accreditation, thanks to a recent partnership forged between Fordham and the Diocese of Brooklyn.

The Graduate School of Education (GSE) and the diocese have jointly created the Catholic School Accreditation Association (CSAA), the establishment of which was marked at a signing ceremony at the diocesan offices on May 25.

“The purpose is to bring the credibility of a major Catholic university into the process of accrediting Catholic schools,” said James J. Hennessy, Ph.D., dean of GSE. “[It will also] help communicate more broadly about the high academic quality of accredited schools, thus boosting enrollments and perhaps reversing the trend of closing schools.”

Characterized by its dual attention to academics and Catholic identity, CSAA provides parochial schools with an alternative to the Middle States Accreditation process.

“Principals were dissatisfied with the accreditation process from Middle States,” said the Most Rev. Nicholas DiMarzio, GSS ’80, bishop of Brooklyn. “We want academic excellence—that’s what our schools are about—but we also want them to be Catholic schools. We want to make sure these … are in concert with one another.”

CSAA will develop accrediting standards for Catholic nursery, elementary, and secondary schools. Though it will be geared initially toward Brooklyn schools, the group foresees having a wider scope.

“This is a visionary response to really look at accreditation practices and pave the way for other organizations to model,” said Thomas Chadzutko, Ed.D., superintendent of schools for the Diocese of Brooklyn. “CSAA fully understands what it means to be urban and Catholic, and understands what it means to be a diocese in a diverse city… It will allow for growth and will in turn allow for other dioceses and archdioceses throughout the country to participate.”

Joseph M. McShane, S.J., president of Fordham, and Bishop DiMarzio presided over the signing ceremony. In his remarks, Father McShane noted that by centering on the preservation of Catholic education, the partnership promotes a higher cause.

“We’re not fighting just for the future of Catholic education, as much as we see that as valued. The schools have been the way of ensuring the church’s future in the United States,” Father McShane said. “This partnership will enable us to help one another in very significant ways. Fordham is delighted to do it, honored to do it, and committed to the work.”

“This is a great opportunity for Fordham to ‘live’ its commitment to Catholic schools,” Hennessy said. “With our support and endorsement, those schools may once again thrive, assuring, then, a steady flow of parochial school students to Catholic high schools, and eventually on to Catholic universities such as Fordham.”