skip to main content
Return to Fordham University
You are at:Home»Inside Fordham»Fordham Tops 20,000 Undergraduate Applications for First Time in Its History

Fordham is hot as a destination for would-be college students. 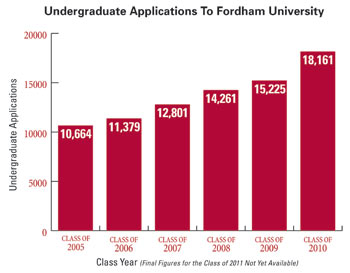 “It’s very exciting for all of us in the Fordham community,” said John Buckley, assistant vice president for undergraduate enrollment. “I’ve been at the University since the mid-1980s . . . and as recently as the early 90s we were managing an applicant pool for the undergraduate colleges that was hovering just under 4,000. For the current freshman class, we had a pool of more than 18,000, and now we’ve surpassed 20,000.”

One force behind the increase, Buckley said, is Fordham’s aggressive marketing efforts to a wider spectrum of prospective students. The University routinely sends out publications and electronic communications to students throughout the Northeast and selected regions across the country.

The more aggressive marketing has yielded impressive results. For example, the University enrolled almost 60 students from California this past fall out of a freshman class of 1,688.

Coupled with the communications, the admission staff has also placed a greater emphasis on having prospective students visit the campuses, inviting them to group sessions, open houses and special events. Buckley said that campus visits were up by 40 percent this past summer, and record numbers of students and their families have attended the University open houses.

“I really do feel that once we get students and their families to spend time with us on campus, we have a much stronger chance to enroll them,” Buckley said. “The feedback on our campus visit programs has been extremely positive.”

In addition, Buckley said that the University’s research shows that New York City has become one of the prime destinations for college students, attracted to cultural, professional and entertainment opportunities. 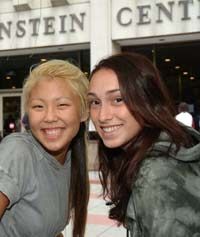 “New York is truly much more of a college town now as opposed to a decade ago,” Buckley said.

The report also noted that as applications have increased, the University’s acceptance rate (the percentage of applicants offered admission) has declined, from 55 percent in 2001 to 46 percent for 2010.

Meanwhile, the percentage of minority students has increased from 22 percent in 2002 to 26 percent this fall. Hispanics make up the largest minority group among the Class of 2010, at 14 percent.

Buckley said that while minority enrollment is strong, the University hopes to push the figure to 30 percent within the next few years.

“It is a reasonably diverse environment,” Buckley said. “But considering our urban location we would like to see even greater diversity, especially in our residential population.”