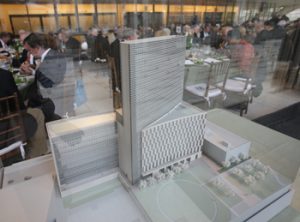 A scale model of the new Law School and residence hall, featured at the post-groundbreaking dinner held at Lincoln Center for the Performing Arts.

Robert Moses Plaza was the site of a spring awakening on May 2, as more than 600 guests celebrated the official groundbreaking of the University’s new Law School and undergraduate residence hall.

The 22-story facility, designed by award-winning architects Pei Cobb Freed & Partners, unofficially broke ground in January and is scheduled to open for the fall 2014 semester.

Mayor Bloomberg said the new construction will lead the way in transforming the Lincoln Center area and will ensure Fordham’s place in the city’s new renaissance as a center for innovation and industry.

“This is a major milestone for Fordham and also for the city,” he said. “New York is America’s biggest college town. With more than 100 colleges and universities, our academic and intellectual stature is a major driver of our economy. Fordham is doing its part by making an enormous investment in its future in a very big way.” 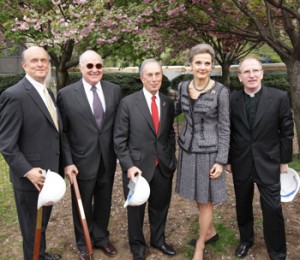 Bloomberg was also alluding to Fordham’s larger, $1.6 billion redevelopment of the Lincoln Center campus, to follow the Law School project. When completed, the campus will feature new buildings for the graduate schools of business administration, social service and education—each with additional residence hall space; an expanded Quinn Library; a theatre for the dramatic arts; and a gallery, bookstore and café accessible to the public.

But the day belonged to Fordham Law. Keynote speaker Dennis G. Jacobs, chief judge of the United States Court of Appeals for the Second Circuit, described the genesis of the Law School, which was founded in 1905. Jacobs said it was subsequently housed in several locations—including the Morse Building on Nassau Street and the Woolworth Building on Broadway—because real estate was scarce for growing schools.

“Dean William Mulligan once observed that Fordham lawyers were so good on their feet because they had no place to sit down,” Jacobs joked. He said that Mulligan, who was dean from 1956 to 1971, was so driven to find a permanent home for Fordham that he helped make the 62nd Street site a reality. The current Law School opened in 1961, and the cornerstone was dedicated by Chief Justice Earl Warren.

“Now that the soil is being turned [again], I wish for this endeavor to suit the dreams of those who conceived it, for it to be a magnet for influential faculty and avid students, a focus of pride for loyal alumni, and a place that in every way serves the great commitments of Fordham Law School—commitments to excellence, craft, ethics, service and community,” he said.

Michael M. Martin, dean of the Law School and Distinguished Professor of Law, acknowledged the “many hands” that made the project possible. In particular, he thanked T.J. Maloney, LAW ’79, and Thomas A. Moore, LAW ’72, each of whom contributed $5 million to the new school. Maloney’s gift will fund a 562,000-volume library; Moore’s gift will fund a new advocacy center to enhance the school’s clinical and experiential programs.

Following the speeches, those seated on the VIP stand accessorized pinstripes and heels with hardhats and gold-plated shovels, and moved to a spot of ground next to the construction pit for the ceremonial turning of the soil.

“This is a signal event in the transformation of our beloved Fordham,” said Joseph M. McShane, S.J., president of the University.

Prior to the groundbreaking, guests were invited to explore the plaza, brightened with newly bloomed red and yellow tulips, and to visit six display stations of the new school, including a miniature rendering of the Lincoln Center Campus Master Plan. Construction site fencing was decorated, too, with 12-foot-high renditions of the new building’s architectural detail, including its two-story atrium, state-of-the-art moot court, and itsouter checkerboard façade and rising slender tower.

The new building promises to help a campus that has struggled with space limitations for more than a decade. When the Lincoln Center facility was built in the 1960s, it was designed to accommodate 3,500 students. Today, it serves approximately 8,000 in four graduate professional schools and an undergraduate college.