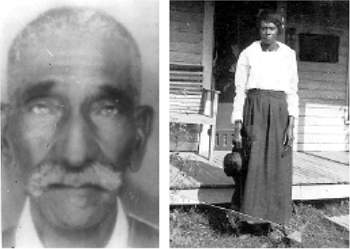 Sandra Arnold’s great-grandfather, B. Harmon, and his wife, Ethel, are buried in undocumented burial grounds in Tennessee.
Photos courtesy of Sandra Arnold

They lie underground, often with no marks to identify them. They’re often interred in out-of-the-way places, hidden from the public. In some cases, their neighbors are the ones they were forced to call “master.”

They are deceased American slaves. And Sandra Arnold wants to find them.

Arnold, a history student in Fordham’s School of Professional and Continuing Studies (PCS), is spearheading the launch of the Burial Database Project of Enslaved African Americans.

Housed in and overseen by the Department of African and African American Studies, where Arnold is also a senior secretary, the project is dedicated to creating a database of enslaved African Americans’ burial grounds in the United States.

Irma Watkins-Owens, Ph.D., associate professor of history and African American studies, serves as co-director with Arnold on the project. The two, along with advisers from the College of William and Mary and Yale and Emory universities, have been developing a website where the public will be invited to submit locations of slave burial grounds around the country.

“The burial grounds of the enslaved are sacred spaces; they mark their place in the world and are a testimony to the humanity of a people denied dignity in life,” said Watkins-Owens. “We must remember, recover and restore these spaces. Doing so is a testimony to our own humanity.” 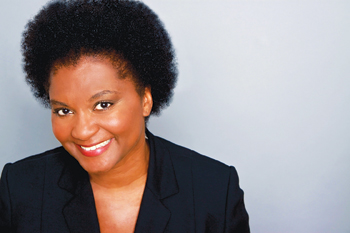 Sandra Arnold is spearheading the development of a national burial registry of enslaved African Americans.
Photo courtesy of Sandra Arnold

The team believes that the database will be a valuable asset to scholars and historians seeking to understand this segment of American history, as well as a tool for genealogical research.

When the website goes live this coming January, in honor of the 150th anniversary of the Emancipation Proclamation, it will be the first project to gather information for a new National Burial Registry of Enslaved African Americans. That registry will officially document the burial grounds, many of which are abandoned or unmarked.

Beyond the value to scholars and researchers, the whereabouts of the sites are important if only for one reason: for the sake of remembrance, said Arnold. Advocacy for remembrance is, in fact, at the heart of the project.

The project’s advisory team includes Michael Blakey, Ph.D., National Endowment for the Humanities Professor of Anthropology and director of the Institute for Historical Biology at the College of William and Mary. Blakey served as scientific director and principal investigator of the New York African Burial Ground Project in lower Manhattan—a project that uncovered the remains of more than 400 Africans buried in the late 17th and early 18th centuries.

Since many of these grounds are located in rural communities, the project’s participants plan to reach out through historical journals, magazines, churches, and volunteer organizations in order to spread the word.

The project came about when Arnold discovered a plantation cemetery, located in her home state of Tennessee, which contains the graves of her enslaved ancestors. In 2003, Arnold visited the site for the first time, paying homage to the graves of her great-grandfather, B. Harmon, a former slave, and his wife, Ethel. Arnold credits her 99-year-old great-aunt, E. Frye (Harmon’s daughter), for igniting her curiosity to find and visit the site.

“She talked about the cemetery all the time like it was a precious jewel. I just wanted to see it, and then I wanted to see where he was buried. So I went out there, and it was just breathtaking,” she said. “It’s an island in a cotton field, at the end of a field road.”

“The potential of this project is immeasurable,” Arnold said. “Not only can it properly memorialize the enslaved, it can also facilitate a mutual and respectful dialogue about a subject that is still very sensitive to many.”

She hopes to eventually apply her research on slave burial grounds toward earning a doctoral degree, but there will always be a personal element that runs deep.

“There’s something inhumane about your people lying in unmarked graves and having things built on top of them,” she said. “Not only does it show a lack of respect, it signifies that you weren’t here, you didn’t exist, and you didn’t count.”