skip to main content
Return to Fordham University
You are at:Home»Inside Fordham»Fordham to Launch $500 Million Campaign at Annual Founder’s Dinner

Fordham University will publicly launch its $500 million capital campaign, Excelsior | Ever Upward | The Campaign for Fordham, on Monday, March 30, 2009, at the Fordham Founder’s Award Dinner, the University’s Board of Trustees announced at its December meeting. 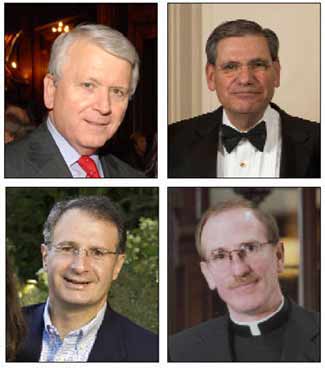 Universities typically raise some portion of their campaign goals during a so-called quiet phase: Fordham had raised $224.3 million of the $500 million goal as of Dec. 2, 2008, and expects the total to be over $250 million by the day of the public launch. Members of the Board of Trustees have thus far given $55.4 million to the campaign, and 68 campaign volunteer leaders have been recruited to date.

“Our effort is being led and driven by a leadership committee of trustees and other volunteers, all of whom have made substantial financial commitments to the campaign,” said James E. Buckman, Esq., FCRH ’66. Buckman, co-chair of the Board’s Development and University Relations Committee, continued, “They— we—will be encouraging other alumni and friends of the University to join us in our financial commitment to Fordham. There is no doubt that these are hard times, economically speaking, for many families: all the more reason why giving now, supporting the endowment and scholarships, is critical to the University’s mission.”

Fordham’s campaign priorities include $80 million for endowed faculty chairs; $70 million in endowed scholarships; $100 million in academic support (faculty recruitment and retention, research endowment to support faculty scholars, student research endowment, support to centers and institutes and programmatic support); $170 million for facilities, including a new Law School and residence hall at the Lincoln Center campus, and at Rose Hill, the construction of Campbell, Salice and Conley Residence Halls, a new campus center, and a student recreation and intercollegiate athletics center; and finally $80 million for annual support.

“The campaign is a vital strategic component for our University and its success is essential to the fulfilling of our mission,” said John N. Tognino (FCLS ’75), chairman of the Fordham Board of Trustees. “All of the members of the Board of Trustees have been heavily involved and supportive of every step of the campaign and, very early in the process, committed to raise a good portion of the campaign to demonstrate their love and commitment to Fordham. By working together we can all contribute to Fordham’s achievements.”

Several prominent alumni have spoken of their attachment not just to Fordham, but to the students who have followed in their footsteps. Many of the University’s significant donors have cited their desire to “pay forward” in offering students the same opportunities and experience the donors themselves benefited from as undergraduates.

“Sue and I felt that we had a moral responsibility to Fordham and future generations of students to extend ourselves to support the institution that provided us with the financial assistance we required to attend college, that brought us together, that helped to shape us ethically and intellectually, and that gave us access to a wealth of opportunities,” said Trustee Thomas P. Salice, CBA ’82, of he and his wife, Susan Conley Salice, FCRH ’82. “Our gift to the campaign reflects our profound commitment to the mission of Fordham University and the essential nature of philanthropy during these difficult economic times.”

The Fordham Board of Trustees enthusiastically and unanimously endorsed setting the campaign launch for the eighth annual black-tie dinner, held at the Waldorf-Astoria in Manhattan, enabling Archbishop Hughes’ “daring undertaking” to continue its transforming mission in the 21st Century. The Campaign for Fordham will reach its goal by 2016, the 175th anniversary of the University’s founding.

“Fordham University is blessed in many ways, not least of which is in its Board of Trustees,” said Joseph M. McShane, S.J., president of Fordham. “Their financial commitment has been both substantial and sustained, but no less important has been their wise counsel on the execution of the campaign, and their willingness to invest their own time and effort in making it a success. Our Board members’ desire to see future generations of students benefit from a Fordham education speaks volumes about the value of that education, and the Jesuit principles it embodies.”