skip to main content
Return to Fordham University
You are at:Home»Inside Fordham»Fordham Teams Up with NYPD on Summer Youth Explorers Program 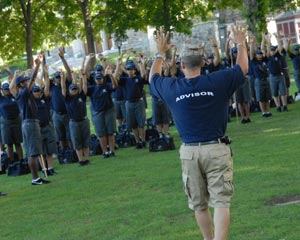 A drill instructor puts the New York Police Department Explorers through their paces at Fordham University.
Photo by Chris Taggart

Seventeen-year-old Vladimir Tess was looking for something to do a few summers ago when he walked into a police precinct in his Brooklyn neighborhood and came upon a flier about the New York City Police Explorers program.

He’s been a member of the Explorers ever since.

The program, which can be found at police departments across the country, is designed to educate young men and women, ages 14 to 20, about law enforcement. Fordham has played an integral role in the New York City program since its inception in 1995, said John F. Carroll, a retired NYPD captain and Fordham’s director of safety and security.

“A former colleague of mine, Rafael Pineiro, who was then the top cop in the Bronx, asked me if Fordham could host the program,” Carroll said. “Fordham would definitely partner with the NYPD because the program fits well into our outreach to the New York City community.”

The program, which is also run in conjunction with the Boy Scouts of America, has flourished ever since, giving nearly 2,000 teenagers a taste of the NYPD and Fordham University over the past dozen years.

Explorers perform an average of 55,000 hours of community service each year, Carroll said.

“They do everything from cleaning lots, to manning tables at a March of Dimes walk,” he said.

And every August, a select group of about 175 teenagers representing 76 NYPD precincts and specialty agencies, such as the Port Authority of New York and New Jersey, make the trek to Fordham every day for two weeks.

“I’m very comfortable with having the kids at Fordham,” said Ralph Pineiro, now chief of personnel for the NYPD and founder of the NYPD Explorer program. “Fordham is a prestigious school with high academic standards and it’s a good environment for these kids.”

The Explorers’ experience at Fordham is capped off by a week of outdoor challenges at a Boy Scout campsite upstate, followed by a formal graduation at 1 Police Plaza in New York City.

While at Fordham, the teens take part in daily physical training drills on Edwards Parade, the Rose Hill Gymnasium, and the swimming pool at the Lombardi Center. They also attend classes in a variety of topics taught by law enforcement officers.

Visitors to the Rose Hill campus in August often stopped to watch the “platoons” in action, as uniformed teens marched in unison and practiced their drills as instructors peppered them with words of confidence.

For Carroll, it’s clear the experience is something that the youths will no soon forget.

“They get a glance at college life while they’re here,” he said. “It helps encourage them to study and look forward to higher education as an attainable goal.”

“It helped me see things as an adult,” said Quintanilla, who is from Hempstead, N.Y. “I learned all about respect.”