skip to main content
Return to Fordham University
You are at:Home»Inside Fordham»Fordham Takes on Cyber Security

Gen. Peter Pace (Ret.), former chairman of the Joint Chiefs of Staff, recalled the early days of the Internet when he rarely saw news articles that dealt with cyber security. Today, he said, he sees them every week. 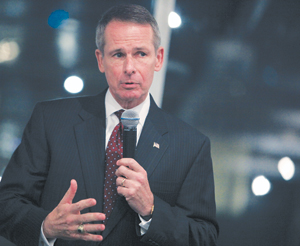 Gen. Peter Pace spoke at the Fordham Wall Street Council on cyber security, an area in which Fordham is developing some interdisciplinary expertise.
Photo by Tom Stoelker

Pace made the remarks on Nov. 13 at a lecture sponsored by the Fordham Wall Street Council, Cyberterrorism and Implications for Financial Markets and Platforms.

Within days of the talk, the Wall Street Journal reported that AT&T executive Frank Jules said that cyberattacks on AT&T had doubled in the last four months and the Washington Post reported that President Obama issued a secret directive allowing the military to act more aggressively toward cyberattacks.

Pace currently serves as distinguished visitor-in-residence at the Graduate School of Business Administration (GBA), a position that stands as just one example of cybersecurity relationships being forged by the University with a cross-section of leaders from government, industry, and the academy.

Pace said that coordination between the private sector and the government will be key to protecting the nation’s computer networks from an inevitable attack.

Currently, nation-states are the only entities that have the ability to launch a crippling attack on another nation. But that will change, said Pace—and it’s not a question of if, but when.
“Whether it’s nation-state sponsored or terrorists, criminals, or hackers, we have got a huge problem,” said Pace. “And part of the problem is we have not been able to talk about it.”
Fordham adjunct professor Anthony J. Ferrante, FCRH ’01, GSAS ’04, teaches two courses on cybersecurity in the Department of Information and Computer Sciences, which he unofficially refers to as “extreme hacking” courses.

“Academia is uniquely positioned to moderate this discussion because its focus is on research and development and it comes from a neutral position,” he said. Since 80 percent of the Internet is privately owned, coordination, not competition, will play a key role, he said.
Fordham tackled the subject in 2009 when the University partnered with the Federal Bureau of Investigation (FBI) to launch its first International Conference on Cyber Security (ICCS). It has co-sponsored three more ICCS conferences since, and it remains the nation’s only cyber security conference partnering with the FBI.

ICCS, which will be held again in August 2013, is co-organized at Fordham by D. Frank Hsu, Ph.D., Fordham’s Clavius Distinguished Professor of Science, and Dorothy Marinucci, executive assistant to Joseph M. McShane, S.J., president of Fordham.

“The Holy Grail of cyber security is everybody sharing information,” said Marinucci. “What’s unique about Fordham’s approach is its partnership with the FBI; you need to factor in the law enforcement angle when dealing with cyber security.”

If the DEFCON hacker convention in Las Vegas is the “black hat” convention of computer hacking, then Fordham’s developing reputation, with its overwhelming law enforcement angle, could very well become a “white hat” antidote.

Pace said the challenge for the federal government is to maintain national security secrets while assisting the business community which is under constant attack. Even at the federal level, those who understand the nation’s cyberattack capabilities are reluctant to communicate with those on the defense side.

“Our system is set up so that only the people who absolutely have to know, know the most important secrets of our country,” said Pace.

He added that if dealing in secret information presents a challenge within the government, it gets far more complicated when protecting the private sector.

“We need to get those folks together and sit down and [talk about]how they would be attacked,” said Pace. “And now, understanding the vulnerabilities, how might we work together?”

Pace said that while securing individual computers is one thing, securing an entire corporation is another matter entirely. It is also big business; the Wall Street Journal quoted AT&T’s Jules as saying it could be a $40 billion market.

David A. Gautschi, Ph.D., dean of the Graduate School of Business Administration (GBA), said that cyber security has become part of “business sustainability.”

“It’s a huge practice,” he said. “It’s now the way that businesses think about how they set themselves up and there’s a lot of pressure to secure the critical operations of the firm.”
GBA is gearing up to the challenge through the IBM-sponsored Center for Digital

Transformation under its founding director W. Raghupathi, Ph.D. Raghupathi also holds law degree in intellectual property in information technology from Fordham Law, underscoring the University’s emphasis on a multidisciplinary approach to the problem.

Indeed, the cyber talent pool freely flows across several Fordham schools and the colleges, and includes the foremost among the University’s experts on national security and terrorism, Karen Greenberg, Ph.D., director of Fordham Law School’s Center on National Security, which puts out the weekly “Cyber Brief.” (Greenberg recently wrote an article in the Huffington Post titled, “Will the Apocalypse Arrive Online?”)

Meanwhile, Hsu is working toward developing other cyber security programs at Fordham as well.

“The idea is to bring emerging technology to government and industry on both a national and international level,” said Hsu.