skip to main content
Return to Fordham University
You are at:Home»Inside Fordham»Fordham Students Find Environmental Inspiration Right in Their Backyard 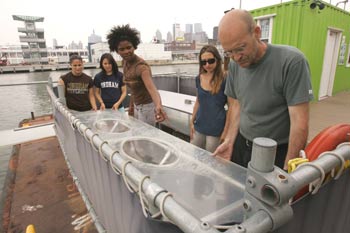 For every student who ever complained, “It’s so nice today; why can’t we just have class outside?” Colin Cathcart has the answer: “Sustainable New York.”

The new summer course, which Cathcart taught to nine Fordham undergraduates in June, took place almost exclusively outside, with a particular focus on the Manhattan waterfront. Rather than discuss green architecture and sustainability from inside a classroom, the class visited some of the most cutting-edge “green” projects and innovations that New York City has to offer.

“Green architecture is dominated by architects and engineers, but architecture is really only one part of urban sustainability,” Cathcart said. “It’s very interesting to see how architecture fits into that larger piece and how cities can be made much more sustainable, livable, enjoyable and pleasurable culturally by following these various figures doing crazy things all over the place.”

One of those projects is the Science Barge, a floating prototype of a sustainable urban farm that also has functioned as an environmental education center since NY Sun Works launched it in May 2007. The barge, which is completely off the power grid, was docked at Pier 48 in the Hudson River when Cathcart’s class descended upon it with a mission: Build a kitchen.

The barge aims to teach schoolchildren not only how fruits and vegetables are grown using re-circulating greenhouse hydroponics, but to show how much waste is generated during food preparation.

“We’re in the kitchen all the time, every day, and it’s where we make a tremendous number of very, very costly environmental choices,” Cathcart said. “So how do you make that connection as clear as possible to kids coming to the kitchen to learn about food, waste and energy?”

Just as the barge, which draws power from photovoltaic cells and wind turbines, treats its own waste water with restorative wetlands and its solid waste with composting, so the kitchen is an example of self-sufficiency.

The materials come from “Build It Green,” a building-material-salvage non-profit group; hot water and power for the food cooker are generated by solar power; and treated rainwater replenish the tanks.

The idea is that children who understand where food comes from and where garbage goes are less likely to adopt unhealthy eating habits.

Of course, it’s one thing to design a kitchen and buy parts. A different kind of learning occurred when the students spent two full afternoons on the barge. Half the class lashed the sink to safety railings (welding was a no-no), while the rest discussed signage with Sara Hanna, the barge’s education coordinator. Among Hanna’s suggestions was to call what goes into the constructive wetlands “gray water” instead of “waste water.”

Krystina Holak, FCLC, ’08, a Nevada native majoring in economics and minoring in business, said she took the class because she felt the need to preserve the environment.

“We’re going to continue to be faced with global warming and other environmental problems that we can’t control by ourselves. Only through knowledge will people fix those problems,” she said.

The class was an obvious fit for Elyse Santoro, FCLC ’09, a social science and environmental studies major from Connecticut. She said it was a great way to explore the green spaces hidden amidst the hyper-urban atmosphere of New York.

“It’s hard to find the green parts of the city, not including the parks, so it’s nice to have been able to explore all these different places,” she said. “[The class] is forcing us to create ways to make cities greener—not just New York, but everywhere.”

“There’s a possibility of action after you have decided what kind of policies or what kinds of design solutions there are. You can take action, and then it becomes about people,” he said. “How do you talk to people about your ideas? How do you respond to people’s needs or biases or positions within the hierarchy? That becomes the key. Design is not the answer; it’s getting it done.”