skip to main content
Return to Fordham University
You are at:Home»Inside Fordham»Fordham Students Expand Reach in Quest for Prestigious Scholarships

Fordham students in 2014 continued a tradition of academic excellence, taking home more than 100 national and international academic, cultural, and service-oriented awards. As of May 12, this scholarship season has included 12 Fulbright awards, a Gates-Cambridge award, and a Truman scholarship among its honors.

According to the Office of Prestigious Fellowships, which is celebrating its 10th year, more awards are likely to come. 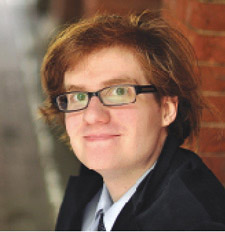 Nikolas Oktaba, an FCLC junior and a classical civilizations and classical languages major, won the Beinecke Scholarship, which will enable him to study how ancient people’s social construction of painful questions of identity had an impact on social and religious life in late antiquity.

The Greek lyric poet Sappho, who was born on the island of Lesbos in 625 B.C., is a perfect example; Oktaba notes that over the millennia, she has been characterized as a chaste school mistress, a homely spinster, or a saucy lesbian.

“I would like to show people that the classics are more than lifeless ruins and broken statuary. I would like to give students the ability to engage with these sometimes painful questions of gender, sexuality, and identity as a whole, in a deeper, more meaningful manner.” 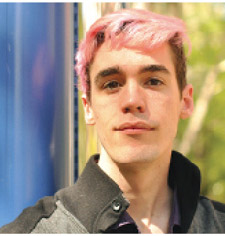 Jeffrey Lockhart, FCRH ’13, GSAS ’14, is the recipient of the Gates Cambridge award, a highly coveted scholarship won by just three other members of the Fordham community since its inception more than a decade ago. This fall, he will pursue a master’s in philosophy at Cambridge University’s multidisciplinary gender study program.

This was the second time he applied for the award, and for Lockhart, a computer science master’s student and a women’s studies/computer and information sciences undergraduate, it was worth another shot.

“It’s just so perfect for what I already wanted to do and what I’m hoping to do. It’s designed to support people who want to be in the academy and want to do academic graduate work, but who also want to make an impact on the real world by working for the improvement of the lives of others,” he said.

At Cambridge, Lockhart plans to research how advocacy around discrimination and violence, which were key organizing principles for the LGBTQ community in the 1980s and 1990s, is changing—as assimilation and marriage issues are becoming the community’s dominant social and political goals. In the fall of 2015, he’ll be pursuing a doctorate in sociology at the University of Michigan. 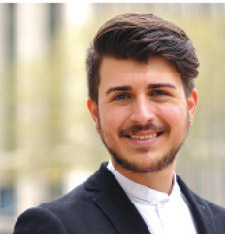 Charlie Martin, FCLC ’14, was named one of six inaugural composition fellows at the Dulwich International Music Academy in Beijing this June, as well as a Gould Composition Scholar at the European American Music Alliance in Paris this July.

Martin, a music and philosophy double major from Atlanta, is one of the first Fordham students to take advantage of the University’s cooperative activities with the Juilliard School, where he took a number of classes.

His classmates there introduced him to the New York Youth Symphony, where he landed a conducting apprenticeship, and learned of the fellowships that will both serve as “boot camps” and ideally help him gain admission to a conservancy for master’s studies.

“I came to New York City drawn to the Catholic, Jesuit setting, the fact that it’s in New York, and the possibility of the Juilliard connection,” he said. “So far all three of those angles are really flourishing for me.” 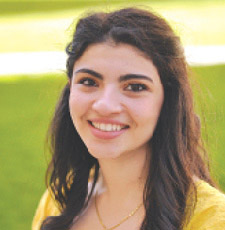 Sama Habib, GSB ’14, won the Pamela Harriman Fellowship from the U.S. Department of State, and will be working at the U.S. Embassy in London this summer. Habib is a marketing major specializing in international business who also minored in political science. She emigrated with her family from Egypt when she was five and is planning to become an ambassador.

“When I came to America, I was fascinated with how different cultures interacted and how even though we were all different, we were able to coexist peacefully,” she said.

“At that time, there were massacres of Christian minorities in Egypt, and I’m a Coptic Christian, which is part ofthat minority. I have been given an amazing opportunity to be in America, to be Coptic, to be able to live freely and to be a woman who has the same opportunities as men.”

Habib has been accepted into Columbia University’s School of International Political Affairs, where she plans to pursue a master’s degree in peace and conflict resolution and security. 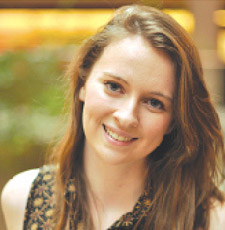 Nora Dwyer, an FCLC junior and a social work major, won a Truman Scholarship in part because of her work on behalf of the homeless. A native of South Berwick, Maine, she was used to helping the small homeless population there. Last May, she founded the Student Coalition for Street Outreach, which visits people living on the streets of New York and provides food and a sympathetic ear. The group has served 750 meals so far.

“When I moved to New York, I was just really disturbed by the disregard the general public has toward this massive problem,” she said.

The scholarship will enable her to get a master’s in social work upon graduation next year, and she hopes to eventually get a doctoral degree. A willingness to improve conditions in society was key to winning the scholarship, she said.

Fordham students garnered 11 Fulbright fellowships as of May 12, awarded to:

• Taylor Jacob, FCRH ’14, to the United Kingdom for her project “Conscientious Objection and Christian Obligation in Women’s Healthcare”

• Henrique DeAgular Valim, FCLC ’14, to Germany, for his project “The Role of the Plant Circadian Clock in Mediating Competition within Monocultures”

• Pedro Cameselle, GSAS student, to Uruguay for his project “The Forgotten Neighbor: The Challenge of Uruguay-US Relations during the FDR Era”

• Daniel Davies, LAW ’14, to the Netherlands for his project “Law and Politics of International Security”

• A Fulbright-Clinton Fellowship to Matthew Solomon, LAW ’14, to Myanmar

Other prestigious scholarships won this year include:

• A Boren Fellowship to William Spisak, a GSAS student, to Morocco

• A DAAD-Rise scholarship to Daniel Brauer, an FCRH junior