skip to main content
Return to Fordham University
You are at:Home»Inside Fordham»Fordham Students and Recent Alumni Get Career Advice at President’s Council Event 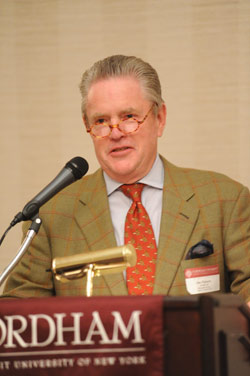 Jim Flaherty, FCRH ’69, gives advice to students on what they can expect from their careers.
Photo by Chris Taggart

At a recent networking event for Fordham students, the keynote speaker kicked off his career-building advice with one simple admonition: for job interviews, shine your shoes and wear a clean shirt.

“I don’t mean that either sarcastically or as a joke,” said the speaker, Jim Flaherty, FCRH ’69, a managing partner with London-based Cannon Capital LLP. “If you don’t think your prospective employers are assessing your appearance as part of your overall suitableness for employment, you’re wrong.”

He spoke at a gathering that brought students and recent graduates together with members of the President’s Council, a group of accomplished alumni that supports the University through various efforts such as speaking on campus and mentoring and counseling students.

In his brief address, Flaherty gave advice that was sometimes homespun, sometimes humorous, and always frank. “Continue to ask ‘why’” after entering the business world, he said, recalling what he sees as a chief benefit of his Fordham education.

“I was often encouraged to ask ‘why’ in English literature classes,” said Flaherty, whose major was English. “Be curious. Wonder about what it is you’re being told. Just as you are today in class, be that in the business world.”

He tried to take the fear out of getting fired, joking that “it can be a very exhilarating experience” for someone who has three children in college and another at a private school, as he did when it happened to him.

“Have someone, when you get fired, to whom you can go for consolation,” preferably someone with seasoned judgment, he said. “You will find you need advice, and it’s better to get it from someone who’s had multiple jobs, been fired, moved around a bit,” rather than from a less-experienced circle of friends, he said.

That advice applies to other areas of life too, he said—“Whether you are choosing wives or husbands or partners … choose someone, as I said, from whom you can get consolation when things aren’t going well.”

His other advice: Don’t expect instant financial gratification, and “don’t expect your first job to be your last job.”

Students and young alumni said they found the remarks refreshing and useful.

“He took the networking topic and made it funny and interesting and, at the same time, gave us excellent advice,” said George LoBiondo, FCRH ’09, a student at Fordham Law School.

The students got further encouragement from Joseph M. McShane, S.J., president of Fordham.