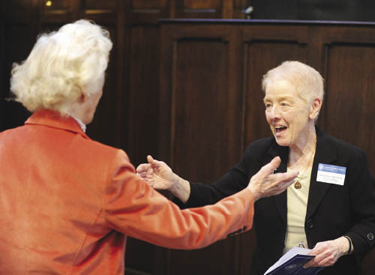 Alumnae of Marymount College, Tarrytown have a place at Fordham that bears the name of their
foundress, Marie Joseph Butler, R.S.H.M.

University Commons, a multipurpose room that once housed the north stacks of Duane Library, was renamed Butler Commons in a ceremony on Dec. 4.

The renaming drew a large contingent of alumnae from Marymount, which was closed in 2007. In addition to a plaque, the room was festooned with pictures and quotes from Mother Butler, who founded the women’s college in 1907.

Joseph M. McShane, S.J., president of Fordham, told the alumnae that he hoped the space would be a new home for them and that their visits be occasions for empowering grace.

“Seventy-one years after her death, Mother Butler continues to inspire us, console us and challenge us. An educator and a pioneer, she had an indomitable spirit and a preternatural energy. She became, for all intents and purposes, the American foundress of the Religious of the Sacred Heart of Mary,” Father McShane said.

Sister Connell, a former professor of history at Marymount and now a writer in residence at Marymount International School in London, noted that Jesuits celebrated the Eucharist with the Marymount nuns and students each Sunday from the first day that the college opened.

Terence J. Shealy, S.J., and Mother Butler shared an “apostolic friendship,” as they helped each other establish spaces for religious retreats, she said.

Father Shealy, founder of the Fordham School of Law, held the first retreat at Mount Manresa Jesuit Retreat House in Staten Island in 1911, one month after Mother Butler held her own retreat in Tarrytown.

“Of all the sons of Saint Ignatius, it was Father Shealy who was Mother Butler’s closest collaborator in the work of retreats,” she said. “They shared the fruits of their own personal retreats. They wrote to each other, asking for prayers and personal support.”

After initially resisting the idea of opening a college for women, Father Shealy came around to the idea, Sister Connell said.

“He was so converted to Mother Butler’s idea that he extended to the college women the weekly lectures that he formerly gave in the academy under the various titles: social science, social psychology, sociology and social philosophy,” she said.

After celebrating the past at the dedication, attendees discussed the future at the ensuing luncheon.

Eugenie F. Doyle, M.D. (MC ’43) recalled meeting Mother Butler and taking a physics class at Fordham in 1942 that helped her earn her medical degree. She lamented that there wasn’t a strong tradition of giving by Marymount alumnae.

“I will forever be grateful to Father McShane and Father O’Hare for trying to help support Marymount and gradually incorporate the capable women from Marymount into Fordham,” she said.

“I’m delighted now that there is an association at Fordham, which is a superb Jesuit University in New York, which we need. And I hope that the tradition of giving will improve and that we will go forward together.”

“I always equated Marymount with safety. It was a place to learn, and a place where boys weren’t dominating. We’ve passed that on to a whole generation of women who are not afraid to stand up in class with boys and be No. 1,” she said.

“Marymount didn’t go away because they did anything wrong. It went away in part because we didn’t share our success back with our school. Fordham literally put its arms around Marymount, and now it’s our turn to put our hands into our pockets.”