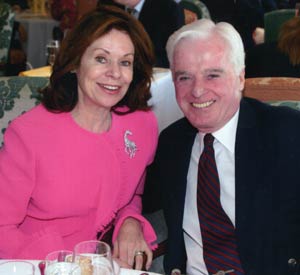 John P. Kehoe and his late wife, Veronica, for whom Fordham’s Black Box Theatre will be named after renovations are complete. The gift also provides for a scholarship fund.
Photo courtesy of John Kehoe

The teacher’s memory has been preserved: now the student’s can be as well.

Such is the sentiment behind a $2 million gift to Fordham made by John P. Kehoe (FCLC ’85, FCRH ’60). His gift, to be made over 10 years and from his estate, will be used to completely rebuild the Lowenstein Center’s Black Box Studio Theatre on the Lincoln Center campus.

When the renovation is finished, the theatre will feature fixed seats sloping down to a lower stage and a state-of-the-art lighting and sound system.

With construction scheduled to begin after this season ends, the new space is expected to open in time for the fall semester. At that point, it will be renamed the Veronica Lally Kehoe Studio Theatre, in honor of Kehoe’s wife, Veronica, who died last April after a two-year illness, which she never allowed to interrupt her life, according to her husband.

“I was looking for a project that would honor my wife’s memory and enable something that could be given to the theatre department about which she cared so deeply,” Kehoe said. “She was an actor, director and producer, but she also was very dedicated to developing new writing and new talent, and had a great interest in the program here under Matthew Maguire.”

With roughly $1.25 million going toward the theatre construction, the remaining $750,000 will establish a scholarship fund for Fordham students who are facing threatening financial circumstances. The scholarship program will bear John and Veronica’s names.

This is not the first time the Kehoes have lent their support to Fordham’s theatre program. “Franny’s Space,” a sprung-floor rehearsal space in Lowenstein that is used by theatre students and Alvin Ailey dancers, was dedicated to the late Marion Francis Harriott, S.C., who was Veronica “Ronnie” Kehoe’s first mentor, teacher and drama coach in high school.

“It’s kind of funny. You have Franny’s Space at one end of the hall, and what will probably come to be Ronnie’s Space on the other end,” Kehoe said. “They collaborated for almost 50 years about things theatrical, and it will go on as always.”

Veronica Kehoe, a graduate of the American Academy of Dramatic Arts, founded the non-profit Gypsy Road Theater Company, which sponsored the 21st Century Playwright Festival for collegiate playwrights in the mid-1990s and mounted off-Broadway productions of the winning plays. In 2002 she joined her husband as a Fordham graduate, earning a bachelor’s degree with honors in religious studies and art history.

John Kehoe, a counselor with the New York-based Abernathy McGregor Group, is a member and past vice chairman of the Fordham College at Lincoln Center Advisory Board, the President’s Council and the University Board of Trustees. He began his education at Rose Hill in 1956, where he was freshman class president, left to serve in the Marine Corps, and returned to Fordham to complete his bachelor’s degree in English literature in 1985. He also holds a masters degree in business from Columbia University.