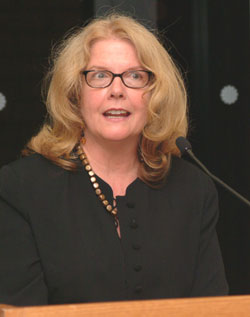 Robin Andersen, director of the University’s Peace and Justice Studies Program, discusses her latest book, A Century of Media, A Century of War at Lowenstein Center.
Photo by Chris Taggart

The digital age has fostered a dangerous merger between the military, the entertainment industry, and mass media, said Robin Andersen, Ph.D., associate professor of communication and media studies at Fordham. Andersen read from and discussed her latest book, A Century of Media, A Century of War(Peter Lang, 2006), on Sept. 27 in Lowenstein Center on the Lincoln Center campus.

“The entire sensibility of language and the graphic style of today’s television war reporting really makes the coverage look like a video game,” said Andersen, who is the director of Fordham’s Peace and Justice Studies and served as chair of the Department of Communication and Media Studies from 1995 to 1998. “The two industries—gaming and high-tech weaponry—even share technology, and it’s a frightening merger. We have turned war into entertainment, and that has huge consequences.”

Her book takes a critical look at a century of war reporting, beginning with World War I and culminating with the ongoing conflict in Iraq. She explores the development of war propaganda, the loss of journalists’ First Amendment rights following the Vietnam War, and the development of what she refers to as the “hyperreal” war in the digital age.

Andersen cites a tendency by the current television media to exclude any footage of war casualties—including the images of flag-draped coffins—resulting in a “loss of moral engagement” between the viewer and the true victims of war. In its place, she says, comes image-making and stagecraft. Andersen said President Ronald Reagan’s “Evil Empire” and President George W. Bush’s “Axis of Evil” are branding: demonizing phrases that tend to further blur the boundaries between fiction and nonfiction. In her book, she also points to the media’s frequent use of animation footage to recreate military maneuvers, and to reporters’ descriptions of the night bombing of Baghdad with expressions like “fantastic” and “riveting visuals.”

“What is missing in the frame of today’s media coverage,” she said, “is compassion for the people on the receiving end of American weapons, the innocent victims of war.” Andersen told the audience she felt compelled to write the book to try and find how this type of coverage has evolved. “It hasn’t just happened overnight,” she said. “It has been a steady progression.”

In her book, Andersen looks back at how 1960s war news coverage created the “Vietnam Syndrome,” a situation in which Americans soured on the war after seeing disturbing images in the media. This said, she says, to severe restrictions on journalists’ access to the front lines. By the time Reagan launched “Operation Urgent Fury” in Granada in 1983, journalists were barred from covering it for five days. The recent embedding of reporters in Iraq, Andersen said, gave them access only to one side.

“Any reporter knows they can’t get too close. The [true]object is to try and tell a broader picture,” she said. “Embedded reporters were telling the military’s story, not the story.”

Andersen read several excerpts from her book, including, “Transforming The Imagery of War,” that evoked laughter from the audience. She described one image-building Thanksgiving media event in Iraq, at which Bush’s apparent offer of “golden-brown turkey generously garnished with grapes and all the trimmings” to soldiers was actually an inedible decoration.

“Robin has been a very active director of the Peace and Justice Studies program and this book is one that I am sure she feels passionate about,” said Father Grimes, who introduced Andersen. “It certainly speaks to a topic that is most important in today’s world.”

“The media today normalize what is ethically abnormal,” said peace activist and guest speaker Daniel Berrigan, S.J. “If we are in a classroom and are not even mentioning the killing of innocent people, we are failing utterly. Our responsibility to our young people has a moral clarity to say, this is not normal.”

Andersen reminded the audience that it is not only soldiers who die in wars, and dedicates her book to “the many journalists who have died trying to bear witness to the costs of war.