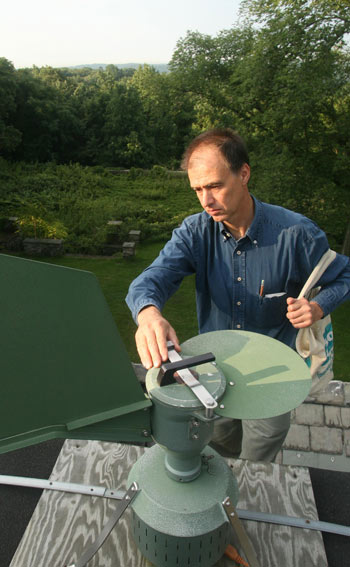 Guy Robinson, Ph.D., lecturer at Fordham, secures a sampling device on the roof of the Calder Center. The device traps pollen in the air, which allows Robinson to issue a count that is made available to the public.
Photo by Bruce Gilbert

For many allergy sufferers, checking the weather report for the pollen count is often a daily ritual. But not many people may know that Fordham University plays a big part in compiling that pollen data for the Hudson Valley.

The amount of pollen in air from ragweed, trees and grass in Westchester County and the surrounding area is monitored every day of the week during the spring, summer and fall by Guy Robinson, Ph.D., a lecturer in the Department of Natural Sciences at Fordham.

Robinson compiles the information at the Louis Calder Center Biological Field Station in Armonk, N.Y., and reports it to the National Allergy Bureau, a section of the American Academy of Allergy, Asthma and Immunology’s Aeroallergen Network.

The network, which is responsible for reporting pollen and mold spore levels to the public, puts the data on its website and television meteorologists and radio weather reporters from around the country use it in preparing their daily reports. The information is also available on Fordham’s website atwww.fordham.edu/pollen.

“Fordham’s [pollen]station probably gives the most comprehensive information in the area,” Robinson said. “It’s important information to know if you have allergies. Pollen is at it’s highest in the spring—birch and oak trees are the biggest culprits. And in the fall, it’s ragweed.”

Robinson himself is an allergy sufferer.

Every morning in the summer and during the spring when he doesn’t have an 8 a.m. class, Robinson climbs up to the roof of the Calder Center and removes a microscope slide out of a sampling device that takes in air at a steady rate.

After staining the slide in the lab, he begins to count and classify the types of pollen particles per cubic meter that have permeated the air for the previous 24 hours.

Robinson (FCLS ’97, GSAS ’03) was trained to run the pollen counting station by Lida Pigott Burney, Ph.D., a former Fordham research associate who started taking the pollen counts with her students in 2001. Robinson takes daily count until the first frost of the year.

In the spring of 2006, the station broke two of its records when the count reached 9,000 particles of birch pollen per cubic meter in early May and a whopping 22,000 of oak pollen later that month.

“Our highest count ever had been 6,700 particles per cubic meter and that record lasted 10 years,” Robinson said.