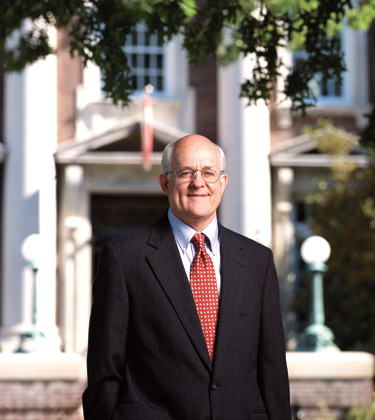 David A. Gautschi, Ph.D., will assume the deanship on July 1.
Photo courtesy of Rensselaer/Mark McCarty

He replaces Robert Himmelberg, Ph.D., who has served as interim dean for the past year.

Gautschi comes to Fordham from the Lally School of Management at Rensselaer Polytechnic Institute (RPI) in Troy, N.Y., where he has served since 2005 as dean and professor of marketing and business economics. He is also the acting director of the Severino Center for Technological Entrepreneurship at RPI.

“It would be hard to overstate the importance of David Gautschi’s appointment as dean of GBA,” said Joseph M. McShane, S.J., president of Fordham. “Dr. Gautschi comes to us at a time when the Graduate School of Business Administration is poised to scale the heights. The coming years will bring many changes to the business landscape, along with many challenges and opportunities for business educators. Dr. Gautschi’s leadership, his experience, and his wisdom make him the ideal candidate to guide GBA through the next decade.”

Gautschi, who earned a doctorate in business administration from the University of California at Berkeley, has extensive experience in business and business education.

He co-founded and managed the French firm PRISM, which offered marketing decision support systems and industry-specific market simulation models. Likewise, he was co-founder and co-managing partner at Janus Enterprise International, in Seattle, which provided contract research, management development, market systems analysis and research for clients in the United States, Europe and Asia.

He was also firm director of the National eCenter and Management Solutions and Services for the West Sector at Deloitte & Touche LLP, and director of research at CCG Group LLC.

Under Gautschi’s leadership, the Lally School of Management at RPI effectively repositioned itself around technological innovation and entrepreneurship, finance and global business in the political economy. There, he oversaw an impressive increase in research productivity and worked closely with small faculty teams to create interdisciplinary programs, including the master of science in financial engineering and risk analytics and the master of science in technology commercialization and entrepreneurship.

At the Lally School, he engaged alumni and the business community in creative new partnerships, including the launch of an innovative roundtable on global business and technology in Wolfsberg, Switzerland, with international academic and business partners.

“I see in GBA an opportunity to wake a sleeping giant,” Gautschi said. “We are well positioned to become a significant player in serving the business community of New York City, and its presence here would also naturally position it to face the global context of business.

“Considering the shaken confidence within executive suites and in the halls of business schools resulting from mounting scrutiny from regulators, legislators, the press and the general public, there is a particularly acute opportunity for the graduate business school of a premier Jesuit university to take a leadership position in cultivating a discerning critique of the role of business in the 21st century.”

Gautschi began his academic career at the Graduate School of Business and Public Administration (now the Johnson Graduate School of Management) at Cornell University. He served as associate professor of marketing at the Institut Européen d’Administration des Affaires (INSEAD) in Fontainebleau, France, where he designed and directed various executive programs. He has also taught at the Theseus Institute in Sophia Antipolis, France, and at the School of Organization and Management at Yale University.

During his career, Gautschi has taught a broad range of courses at the M.B.A. and Ph.D. levels, in which he draws heavily on his research into the optimization of marketing decisions, choice models, and retailing and marketing systems, as well as his experience in industry and entrepreneurship.

Gautschi will work closely with Donna Rappacioli, Ph.D., dean of the faculty of business and dean of the College of Business Administration.

“Dr. David A. Gautschi is exactly the kind of leader we’d hoped to find for GBA,” Freedman said. “In him we gain a breadth of experience and an international perspective that will serve our students and faculty extremely well.”