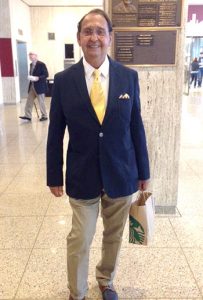 Joe Caputo loved to work and he loved to dance. Some knew him as the “Mayor of Lowenstein” and others knew him simply as “Our Joe.”

Caputo, a supervisor of faculty support and office manager at the Graduate School of Social Service (GSS) since 1968, passed away on Feb. 15 of cancer at age 68. He could often be found out on the plaza, which knew well as he had been enjoying the space since it was built 47 years ago.

“He was very proud that he was the longest serving employee at Lincoln Center,” said Peter Vaughan, dean emeritus of GSS.

Vaughan was with Caputo two days before he died and said that that Caputo was planning a move into a new apartment.

Caputo’s brother, Andy, said “it was only in the last few weeks that he was thinking of retiring. He loved going to work.”

An avid dancer, Caputo served as a board member of Times Squares, a square dance club in Manhattan. Members there said they remember him as someone who always wore a positive, good-hearted smile.

“Joey was a much loved square dancer,” said David Kampel. “Even as he was getting sicker, he still danced.”

Born on Christmas Day in the Bronx, Caputo began his career with Fordham right out of high school when GSS was still at the Lancaster Hotel on 38th and Madison Ave. After the school moved to the Lincoln Center campus, he helped facilitate placement of students in their fieldwork. GSS Associate Dean Susan Bair Egan said that, for many alumni, Caputo was the face of the program.

After several years at the fieldwork desk, Caputo made the jump to administration, eventually becoming office manager. Vaughan said that as an administrator Caputo never forgot his union roots and “was always respectful of union rights and its potential for helping employees who were members.” 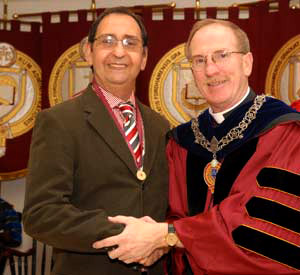 Caputo with Father McShane in March 2008 after receiving the Archbishop Hughes medal for 40 years of service.

“He was a New Yorker through and through,” said Vaughan, recalling that during their last visit Caputo playfully argued about which bus Vaughan should take home.

“He said to me, ‘Why are you taking that bus, it doesn’t run on the East Side,’” said Vaughan. When he defended his bus route, Caputo had replied, ‘You finally got a handle on it.’

“I never heard him say a bad word about anybody,” said Vaughan. “He was extremely loyal to Fordham. He was a good guy and a good friend.”