skip to main content
Return to Fordham University
You are at:Home»Inside Fordham»Fordham Mourns Jesuit Artist-in-Residence Robert Gilroy
Mixed Media by Father Gilroy, left “A Time Away” and right, “Partial Portrait of Native American with Eagle Feather”
Robert “Bob” Gilroy, S.J., a Jesuit priest and mixed media artist who became an artist-in-residence at Fordham University earlier this year, passed away on Oct. 29. He was 58 years old.

Known for integrating prayer with art, Father Gilroy believed that spirituality could be manifested through creative practices like painting. He launched the website, Prayer Windows, more than a decade ago to offer guidance on how to encounter God through the arts.

“Through art, we co-create with God,” he wrote in an article published in the National Christian Life Community of United States’ Harvest magazine in 2000. 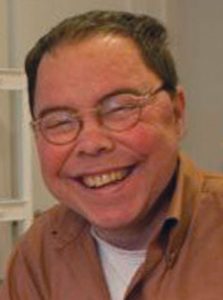 A wake will be held on Nov. 7 from 3 p.m. to 5 p.m.; and a funeral Mass will be held on Nov. 8 at 10 a.m. at the Campion Center’s Chapel of the Holy Spirit in Weston, Massachusetts
A native of Boston, Father Gilroy entered the Society of Jesus in 1986 and was ordained to the priesthood in 1997. He studied at Bates College, Loyola University Chicago, and Lesley University in Cambridge, Massachusetts, where he received training in art therapy.  In addition to serving as a spiritual director at the Sioux Spiritual Center in Plainview, South Dakota, and a chaplain at St. Francis Mission on the Rosebud Indian Reservation, he provided spiritual direction at Eastern Point Retreat House in Gloucester on Cape Cod, and at the Campion Renewal Center in mainland Weston.

Most recently, Father Gilroy, who lived at an infirmary at Murray-Weigel Hall, worked with Campus Ministry to offer spiritual direction. He led retreats and talks focused on art and spirituality at the Westchester campus, where he also had a part-time art studio.

Before his death, Father Gilroy was slated to do a number of lunchtime talks on Ignatian spirituality and art at the University, as well as an art and yoga retreat in December at the Goshen Center.

Carol Gibney, associate director of Campus Ministry and for spiritual and pastoral ministry at Rose Hill, worked with Father Gilroy on a Lenten art and yoga retreat this past March.

“He was really gifted at sharing his love and passion for art, and using art as a portal into the sacred to allow us to pause and reflect,” she said.

Though Father Gilroy, who struggled with diabetes, was new to Fordham, Gibney said his energy was magnetic—as was his cheerful laugh.

“He laughed with his whole body,” she said. “It was really joyful. He had what I desired for others and myself—an interior freedom. He allowed God’s light to shine through him.”

In a Facebook post, James Martin, S.J., acclaimed author and editor at large at America magazine, described Father Gilroy as “an amazing friend and Jesuit brother” who was “supportive, interested, generous, thoughtful, caring, funny, wise, and challenging when he needed to be.”