skip to main content
Return to Fordham University
You are at:Home»Inside Fordham»Fordham Lights the Fuse on Basketball Season 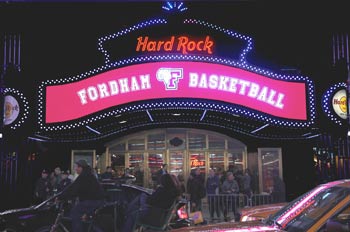 The artifacts on display at the Hard Rock Café in Times Square represent rock ’n‘ roll excellence: from concert posters promoting the Beatles to guitars signed by Eddie Van Halen.

On Nov. 4, more than 100 supporters of Fordham basketball gathered amidst the memorabilia with an eye toward creating some excellence on the hardwood.

The annual Tip-Off Reception, meant to celebrate the opening of a new basketball season, was held at the Hard Rock Café for the first time. The highly visible venue was selected to augment the marketing buzz building around Fordham basketball.

“It’s great to see the enthusiasm of the players and the coaches from both the men’s and women’s teams,” said attendee Dennis McGrath (FCRH ’64, LAW ’67).

McGrath added that he had noticed the University’s efforts to promote both squads. Since October, Fordham has placed advertisements on Metro-North trains, New York radio, the back covers of theDaily News and New York Post, and at Yankee Stadium, among other venues.

“They’ve certainly been reaching out more through the media, which I think is very good,” he said.

Executive Director of Athletics and Recreation Frank McLaughlin let the crowd know that the student-athletes appreciate the added attention.

“There’s a real pride to see the Fordham name in the newspaper, on TV and on the radio. It means a lot to the players for them to know we support them and are willing to put forth the energy and effort to spread the word about what they do,” McLaughlin said. “Now we’ve got to keep the momentum going.”

“We’re excited about the new initiative, but we know that it’s time for us to go out and prove it,” Whittenburg said. “The most important marketing is for us to be successful, and that’s going to happen one game at a time, one practice at a time.

“My motto is ‘passion and patience,’ and we have to continue to work on that.”

McLaughlin spoke of the importance of the men’s team playing two games at off-campus venues—a Dec. 19 contest against Villanova at the Izod Center and an Atlantic 10 game on Jan. 13 at Madison Square Garden against Dayton.

Women’s head coach Cathy Andruzzi invited the guests to attend the women’s game on Dec. 5, where “we will be having one of the greatest events in the history of Fordham basketball,” she said, “We’ll be retiring the jersey of Ann Gregory, the all-time leading scorer and rebounder.”

Andruzzi also announced that the women’s team will appear in a televised game this season—at noon on Jan. 17 against Duquesne.

Amidst the rock ’n‘ roll ambience and the optimism that comes with the start of every season, many of the attendees said they were particularly looking forward to seeing the Rams this year.

“I’m interested in becoming more involved with the University—become a little more active,” said Robert Ruotolo (GBA ’07). “I’m a big basketball fan, and it would be great to have a successful program at my alma mater.”