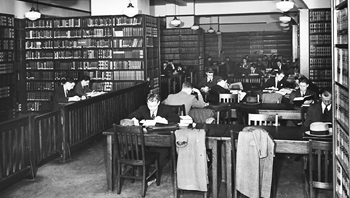 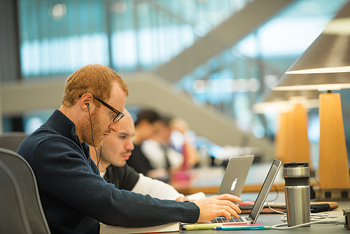 Thanks to evening programs, countless students who juggle work and family responsibilities have been able to obtain higher education degrees without interrupting their lives. This year, Fordham School of Law marks 100 years of providing that pivotal opportunity to students through its evening program.

Evening courses began shortly after the law school’s opening in 1905, creating a more flexible schedule for the students and faculty who worked in downtown Manhattan, where the school was then located.

“It was not regarded as a special division as it is today,” said Robert Kaczorowski, professor of law and author ofFordham University School of Law: A History (Fordham University Press, 2012). “The law school had a morning division and an afternoon division, and the evening division was simply a third segment of the day during which students could attend the school.”

Moreover, because most students worked full-time, day and evening courses did not represent a distinction between full-time and part-time students.

“Prior to the 1930s, there was no standard definition of full-time and part-time as we understand them today,” Kaczorowski said. “A student who was in a part-time program in the law school, but who worked in a law firm, was considered a full-time student, whereas a student who attended law school, but worked in a non-law related job, was considered part-time because the individual was not devoting his or her entire time to the law.”

Eventually, Ignatius M. Wilkinson, then dean of the law school, restructured the programs so that students taking evening courses received an extra year to finish degree requirements.
By the 1960s or so, many of the elite law schools such as New York University gave up their evening programs, said Michael M. Martin, dean of the law school.

“It was seen as not quite fitting with a lead school,” he said. “But Fordham has retained its program because we think there are people that we can help with it.”

Today, the part-time program reflects the structure that Wilkinson helped to establish, allowing participants four years to complete their schooling instead of three. Far from impinging on their class work, their lives outside of school enhance their performance in the classroom.

“I have always admired our evening school graduates—what they have achieved, and often under adverse circumstances,” said Constantine “Gus” Katsoris, LAW ’57, the Wilkinson Professor of Law, who has taught in the program for nearly 50 years. Katsoris is also the parent of an evening division graduate. “It’s not easy leaving home early in the morning, putting in a grueling day at work, later attending classes at night, and then returning back home some 15 hours later.”

Patton Corrigan, LAW ’70, was one such student. With a wife, two children, and a third baby on the way, Corrigan worked full time as a New York City taxi driver to support his family while attending school at night. Many of his classmates were also juggling jobs and families, Corrigan said, which made for a diverse group.

“We had firefighters, New York City police officers, CFOs of companies, people who had other careers and had decided to switch,” said Corrigan, who practiced banking law in Manhattan after graduating. “It was tough, but we had a good time—with the professors, with each other. It was a wonderful learning experience.”

On May 20, the school will commemorate the program’s centennial with a series of master’s classes to be held—fittingly—during the evening. Alumni will have the opportunity to take CLE credit courses at no charge taught by current Fordham Law faculty. Corrigan, whose law degree ultimately allowed him to acquire several companies, including Yellow Cab of Chicago, is co-chairing the event.

“Law school changed my life. The ability to go to a law school like Fordham gave me the opportunity to do almost any job I wanted,” he said.

The diversity that characterized Corrigan’s evening school experience has shifted over the century, Martin said. While earlier decades saw students spanning the career spectrum, today the program includes more students working in fields such as finance looking to bolster their understanding of the law.

Nevertheless, the evening students’ dedication to their education has remained unshakable.
“They know what the real world is like,” Martin said. “They’re highly motivated, and they have to be very well-organized. For many, they work all day, then they come to class from 6 p.m. until almost 10 for four nights a week, which means that they have to use their commuting time and weekend time very efficiently—and it shows.”