skip to main content
Return to Fordham University
You are at:Home»Inside Fordham»Fordham Law Film Fest Opens with Screening of Recount 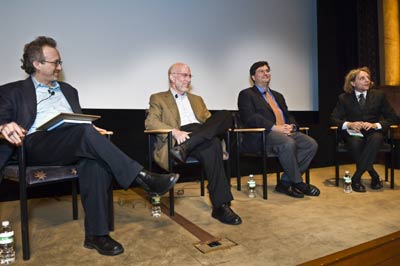 Panelists at the opening night of the Fordham Law Film Festival are (from l to r): Abner Greene, Benjamin Ginsberg, Ron Klain and Thane Rosenbaum.
Photo by Salem Krieger

With the 2008 presidential election occupying the national headlines, the third annual Fordham Law Film Festival opened on Oct. 17 with a trip to a not-so-distant election, when most Americans first learned about hanging chads.

Recount, the Emmy Award-winning film about the protracted battle behind the 2000 presidential election, was screened for 160 viewers at the HBO Theater in Midtown.

Festival patrons packed the theater and spilled into an overflow room to watch actors Kevin Spacey, Ed Begley Jr., Denis Leary and Laura Dern portray the essential players in the recount, which lasted 36 days and caused a constitutional upheaval the likes of which the country had never seen in its modern history.

When the lights came up, Thane Rosenbaum, John Whelan Distinguished Lecturer in Law and director of the Forum on Law, Culture and Society, sat down with Ron Klain and Benjamin Ginsberg, who headed the legal efforts in Florida on behalf of the Gore-Lieberman and Bush-Cheney teams, respectively.

Abner Greene, Leonard F. Manning Professor of Law and author of Understanding the 2000 Election(New York University Press, 2001), joined them onstage to help place the struggle in a larger perspective.

When Rosenbaum asked Klain what it was like to see himself portrayed by Kevin Spacey, he noted that although the movie was largely fictionalized, it got most of the larger points correct.

For instance, Michael Whouley, who was played by Denis Leary, never visited Tallahassee during the crisis. But in the movie he is shown commiserating with Klain as Republicans successfully manipulate Florida Secretary of State Katharine Harris.

The film accurately showed the chaos of working on six major legal cases in the time it normally takes to prepare for one.

Ginsberg joked that even though the Republicans won the recount, the Democrats won the movie.

“This was a very good, compelling story, and I hope you all enjoyed it, but it should not be confused with a documentary,” he said. “It was very exciting and fun in that it captured a lot of the tension that we felt in having to deal with the decision. But in reality, it was 36 days in which we all worked 18 hours on a good day, and it got encapsulated into 116 minutes.”

“It really has a very similar narrative. Ben of course, is Number Two, Jim Baker is Dr. Evil, and Klain is Austin Powers,” Rosenbaum said, drawing chuckles from the crowd. “Same kind of perspective, there’s a kind of perception of good versus evil here.”

Ginsberg agreed that the Republican side of the story wasn’t very flattering, but he wasn’t too bothered by it.

“The HBO folks were all pretty candid about saying they felt it was a more compelling story to look at this from the Democrats point of view,” he said.

Klain cautioned that aside from the winner/loser aspect of the contest, what audiences should take away from the movie is the extent to which the voting system in the United States remains in dreadful shape.

“Both sides were trying to grope their way through a system that could not really be fixed after the fact—didn’t really have the right laws and procedures in place to have a fair and just outcome,” he said. “Almost any outcome in Florida would have had some sense of arbitrary-ness to it.”