Mario Cuomo doesn’t care if you like The Godfather.

After resisting for 41 years, New York’s 52nd governor finally sat down to watch Francis Ford Coppola’s 1972 epic about an aging patriarch of a Mafia syndicate in New York circa 1950.

And although he allowed that it was “great, if you’re referring to artistry,” Cuomo called it and its descendants, such as The Sopranos, fuel for stereotyping Italians as affiliated with organized crime.

“I don’t think it’s done deliberately, it’s just a bad habit, which is stimulated by movies like The Godfather. There have been several, not as good in terms of artistry as The Godfather, but as rotten in terms of the message they send. Whether they like it or not, that message is damaging,” he said on Oct. 20 at Fordham Law School.

His appearance, along with former CNN host Larry King and Thane Rosenbaum, John Whelan Distinguished Lecturer in Law, was part of the Forum on Law and Culture & Society’s Eighth Annual Film Festival, which ran from Oct. 18-24.

The evening featured a wide-ranging conversation that touched on stereotypes, artistic license, and growing up in post-World War II New York (King in Brooklyn, Cuomo in Queens).

Through it all, Cuomo stuck to his position that The Godfather and its ilk have caused irreparable harm to Italians, including himself. King recalled that when Cuomo chose not to run for president in 1988, rumors swirled that it was because Cuomo’s wife Matilda, who (like the characters in the movie) is Sicilian, had Mafia connections.

Cuomo also noted that when he first ran for office, polls showed that only 16 percent of New York state residents said they knew him, and 14 percent said they wouldn’t vote for him because of his “relationship to bad criminals.”

The movie’s violent depiction of “justice” outside the realm of law came up in the discussion.
“Americans like revenge. They like getting even. They like the fact that this guy squealed on that guy, and that guy rubbed him out,” King said. “We like to see people getting even.”
Cuomo would not be moved, however.

“Do you say to your 10-year-old son or 12-year-old daughter: ‘Look, if we’re having trouble, don’t worry, cause I got a tough guy from the old neighborhood, and we’ll send him out, and he’ll break the s.o.b.’s legs?’ You wouldn’t do that, but that’s what they’re asking you to do in The Godfather.”

Rosebaum noted that one theme running through the film, exemplified by the lines “Leave the gun, take the cannoli,” and “It’s business, it’s not personal,” separates the characters’ behaviors at home from how they act in business.

Just as the Corleones are a murderous bunch when it comes to business, where family is involved they are virtuous.

Again, Cuomo wasn’t buying it, noting that studies have shown that Italians and blacks are the most abused groups in film.

“I know a lot of people like me who curse the Mafia every day because the Mafia brought a system of justice that is alien to our system and contradicts ours,” he said.

“Ours is intelligent. You have opportunities to state your case, and if the guy is really bad, [the state]can even kill him. We have a death penalty in New York State.

“I’m against the death penalty as well—except for people who make bad movies,” Cuomo said to laughter. 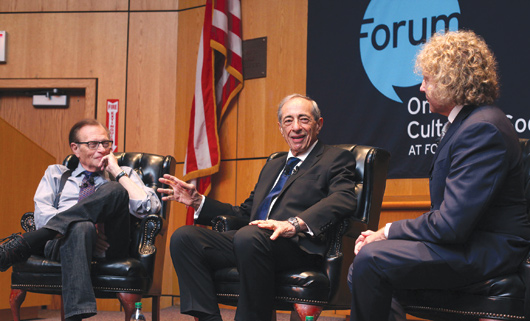