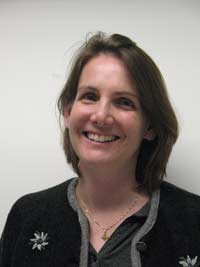 Edith Kealey (GSS ’03) took home $2,000 thanks to her second-place finish on Jeopardy!
Photo by Janet Sassi

Fordham’s Edith Kealey (GSS ’03), a doctoral student and member of the adjunct faculty in the Graduate School of Social Work (GSS), appeared as a candidate on Jeopardy! on Friday, Oct. 31. On the same day, Jean Marie McCormick (FCRH ’01) appeared on Who Wants to Be a Millionaire, and appeared again on Nov. 3.

McCormick took home $50,000 after her two-day appearance onMillionaire. Kealey finished in second place on the Jeopardy! show behind the defending champion, and took home a second-place cash prize of $2,000.

“What I can say is that it was really fun, and will be a dinner party story that I’ll have for the rest of my life,” said Kealey, who is the wife of Joe DiBari, director of sports information at Fordham, and the mother of two boys. “Alex Trebek is very sharp.”

Kealey said she was encouraged to take the show’s online 50-question tryout test by her former college roommate, who was a contestant in 2007. Kealey scored well, and when the Jeopardy! “Brain Bus” scheduled in-person tryouts in the New York metropolitan area, she was invited to do a mock game.

To Kealey’s surprise, many of the other candidates were on a first-name basis with the Jeopardy! representatives, she said.

“There are actually Jeopardy groupies who try out repeatedly,” Kealy explained. “These candidates knew so much about the show—they even knew when Alex Trebek had shaved off his moustache.”

Following the April tryout, Kealey said she forgot about it. She was contacted in August to appear on the September episode.

Once the actual show began, Kealey said that her biggest challenge was not whether she knew answers, but, rather, how well she could maneuver the ring-in buzzer.

“You get locked out if you press the buzzer too soon, before Alex finishes reading the questions,” she said. “So there is a very narrow window in which to ring in.”