skip to main content
Return to Fordham University
You are at:Home»Inside Fordham»Fordham Inducts Five into Athletic Hall of Fame

The Fordham University Athletic Hall of Fame increased by five members on Feb. 5 when the Rams inducted their newest class at the annual Hall of Fame Awards Brunch.

Joining the likes of Fordham notables such as Frankie Frisch, Vince Lombardi, Vin Scully, Wellington Mara and Peter Harnisch were:

• Tad Kornegay, GSB ’05 (Football)—Kornegay’s record-setting career was capped by All-America honors as a senior in 2004. That season, he led the Patriot League with eight interceptions while twice setting a Fordham record with three interceptions in a single game.

• Edgar Nanne, FCRH ’03 (Men’s Rowing)—In two years at Fordham, Nanne became one of the top male rowers in school history, winning gold medals at the Dad Vail Championships and the ECAC National Championships while also competing in international championships for his native Guatemala.

• Bill Slater, GSB ’64 (Track/Cross Country)—A mainstay with the Fordham cross country and track programs in the early 1960s, Slater set numerous school records and was a member of several skilled relay teams before his career was curtailed by injury.
The day started with a special mass at the University Church. The Hall of Famers and their guests then assembled in the McGinley Center Ballroom for the formal induction ceremony. Master of Ceremonies Brian Clark, FCRH ’10, introduced each new Hall of Famer, who received a plaque from Joseph M. McShane, S.J., president of Fordham, and Executive Director of Athletics Frank McLaughlin.

After the ceremony, Kornegay spoke on behalf of the inductees. He recalled how difficult it was to keep up with academic and athletic responsibilities, but emphasized that doing both brought out the best in him.

“Being a student-athlete at Fordham is difficult—trying to balance school work with sports—but the hard work and long hours helped shape us to be successful,” Kornegay said.

He passed along thanks from his fellow Hall of Famers to their families, coaches and friends. And he had a special person to thank: Sister Anne Walsh, R.S.H.M. “Sister Anne was a big part of my experience here at Fordham,” Kornegay said. “She was diligent at setting up study halls for the football team, and that made all of us better students.”

Kornegay closed by telling two stories. The first was from fellow inductee Mollie Welsh Kruger, whose swimming and diving coach helped her to gain enough confidence to try a difficult move off the three-meter board.

He also told a story of his own.

“In my sophomore year, I was having a bad game against Holy Cross and I took myself out of the game, convinced I couldn’t do the job,” Kornegay said. “But my coaches argued that I was capable of playing and they gave me the confidence to go back in the game.”

He not only went back into the game, but he intercepted a pass on the Fordham 10-yard line late to seal the win. The Rams went on to win their first Patriot League title that fall. 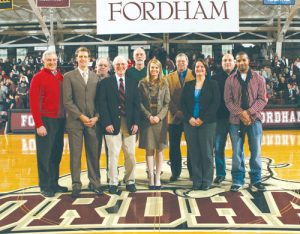