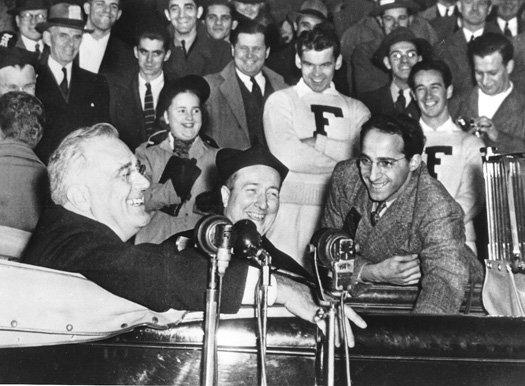 Fordham played host to a serving president of the United States for the first time when Franklin D. Roosevelt visited campus in October 1940.

Roosevelt came to the University inthe climactic week of his campaign for a third term, which was both historic and unsettling, even to some of his supporters. In a symbol of the campaign’s pitched battle, FDR arrived at Fordham on Oct. 28—two days after a visit by his Republican rival, Wendell Willkie.

Crowds lining the Grand Concourse cheered Roosevelt as he rode to campus. But he received a more measured welcome from Fordham’s president, Robert I. Gannon, S.J., whose anti-Roosevelt views were no secret.

In his welcoming remarks, Gannon called Roosevelt “a man whose imprint is forever fixed on our national history.”

“Our country has been reshaped in the last eight years and will never be just what it was before,” he said.

Roosevelt reviewed Fordham’s ROTC coast-artillery unit and presaged America’s involvement in World War II when he referred to the days when “every able man had an obligation to serve his community and his country in case of attack.”