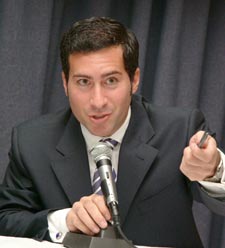 The 2006 presidential election in Mexico had a flavor all its own, with candidate Andres Manuel Lopez Obrador famously admonishing sitting President Vincente Fox (who backed Lopez Obrador’s opponent), with the phrase “Callese chachalaca,” or “shut up, noisy bird.” The insult backfired, with many Mexicans apparently believing Lopez Obrador had crossed a line by demeaning the office of the presidency. The left-leaning Democratic Revolution Party (PRD) went on to lose in early September, Mexico’s top electoral court confirmed Felipe Calderón, the conservative former energy minister, as the country’s next president. He takes office on December 1.

Fordham’s Master’s Program in Elections and Campaign Management and Latin American and Latino Studies programs hosted a distinguished panel of experts to discuss the election on Thursday, Sept. 14. The panel, “Mexico’s 2006 Presidential Race: the Election, the Aftermath and the Political Implications,” was held in cooperation with the New York Chapter of the American Association for Public Opinion Research.

Many of the concerns in Mexico’s presidential election would sound very familiar to Norteamericanos: the influences of money and political consultants; the way the media shape a campaign; and how one governs after a contested victory. 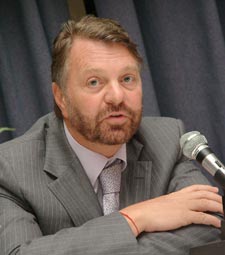 “There are two points of view,” Beltrán Urgarte said. “Political consultants can significantly modify results of elections, or, political consultants have minimal effects on elections. Polls don’t affect the people, but they have an enormous effect on campaigns because politicians read the polls and change their tactics.”

An important factor in the closeness of the presidential race, according to Castañeda, was that Manuel López Obrador, as the former mayor of Mexico City, received “five years of free national media exposure,” raising his profile among voters. He compared the national exposure López Obrador received as mayor of Mexico City to that of Michael Bloomberg, mayor of the City of New York. “It made them both national figures,” he said.

“The two electorates [for López Obrador and Calderón]are very similar,” Castañeda said. “If they weren’t, López Obrador would have lost by many more points.”

“What comes now?” Castañeda said. “I am more concerned about the future based on a number: the 35 percent protesting [Calderón’s victory]. It is very difficult to get anywhere if you have 35 percent of the 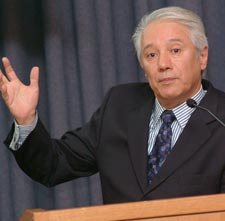 vote, which Calderón does, and 35 percent of the people opposing you. It’s very hard to get anything done.”