skip to main content
Return to Fordham University
You are at:Home»Inside Fordham»Fordham Hosts “Autism and Advocacy: A Conference of Witness and Hope” 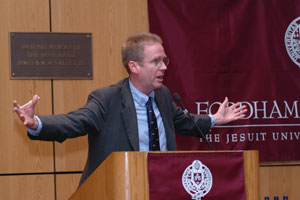 Autism is a disorder that has many unknowns; although it is regarded by the medical community as one of five Pervasive Development Disorders (PDDs), individual manifestations vary. Genetic components and medical treatments have also proven hard to pin down. It often is a challenge for people defined as autistic to deal with society at large, and conversely for that larger world to accept them. How can we, as a society, respond to these persons and their caregivers in a compassionate and respectful way?

These were among the issues raised at Lincoln Center’s McNally Amphitheatre on Oct. 27 during a daylong conference “Autism and Advocacy: A Conference of Witness and Hope.” The conference addressed different aspects of the developmental disorder and its effect on autistic persons and their families, and was sponsored by the Francis and Ann Curran Center for American Catholic Studies. The event’s benefactors included John Tognino, chairman of the Fordham Board of Trustees, and his wife, Norma Tognino. More than 200 people, including educators, activists and parents of autistic children, attended three sessions involving clergy, academics and advocates.

Joseph M. McShane, S.J., president of Fordham, welcomed the conference attendees, saying that such events are “part of a service to our city and nation.” He thanked Tognino for his active role in University affairs, and also credited conference coordinator James. T. Fisher, Ph.D., co-director of the Curran Center and professor of theology at Fordham, for “bringing to our attention matters that society would choose to forget. His energy and focus made this [event]possible.” 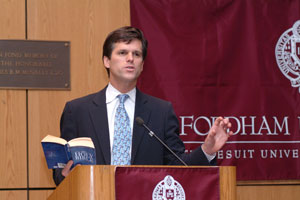 Special Olympics president Timothy Shriver opened the conference by relating his own experiences with the mentally retarded and their struggle for dignity and recognition.

Fisher, whose son Charlie is autistic, spoke of the “paradox” of autism, a condition which is often characterized by isolation, but whose affected parties are continually reaching out for a real sense of community. He told a touching story of Charlie gradually learning to master the intricacies of riding a bicycle, culminating with a fall and hospital visit. The rewarding part of that experience, said Fisher, was that the emergency room personnel “did not see him as a child with autism. They said to me, ‘hey, that’s what nine-year-old boys do.’”

Fisher noted the connections between American Catholic Studies and autism advocacy, saying that both are grounded in the value of the dignity of the human person, and in never reducing a person to a condition or part; rather seeking to educate or assist the whole person.

The opening address was made by Timothy P. Shriver, Ph.D., chairman of the Special Olympics. Keeping alive the advocacy of his mother Eunice, who founded the Special Olympics in 1966, Shriver compared his experiences with the mentally retarded to those seeking rights and recognition for autistics. He remarked that a West African greeting which translates to “I see you” could apply to these populations.

“We are on a quest to be seen and discovered,” said Shriver, who said that one of the best ways autistic children, and others like them, could find acceptance is through peer groups. “This is something only another 14-year-old can do—you can make a difference in the lunchroom today,” he said.

Audience members were reminded of the sensitivity of autistic persons, a number of whom were in attendance, when Kristina Chew, Ph.D., requested that there be no clapping after speakers had finished. The noise, she said, could be quite alarming or disturbing to autistics, and instead encouraged attendees to “flap,” or silently wave their hands in the air to show appreciation, a motion which became familiar to attendees as the day progressed.

Chew is the author of the blogs www.autismland.com and www.autismvox.com. (Several panelists noted that the Internet is a burgeoning communication tool for a population for whom ‘standard’ communication is not always the easiest option.) 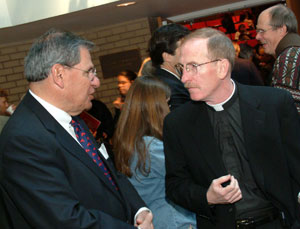 Fordham trustee John Tognino, who has a grandson diagnosed with Asperger’s Disorder, shares a moment with Joseph M. McShane, S.J., president of Fordham, during a break.
Photo by Chris Taggart

The Rev. William C. Gaventa, M.Div., opened the panel on “Communities of Faith Engaging Autism,” by relating a story of a Washington D.C.-based autistic person he came to know via e-mail. She eventually sent Rev. Gaventa what he called a “10-page spiritual biography,” which detailed her acceptance by an Evangelical church after many frustrating rejections in other houses of worship.

“We have to be in the process of restoring the sanctuary,” said Gaventa, “a place where all people feel safe.”

Mary Beth Walsh, Ph.D., of Caldwell College said that a fellow parishioner told her that everyone should applaud after the homily, which her autistic son Ben did at his first mass. Walsh said her fellow parishioner “did not ignore Ben’s difference, she embraced it.”

Similarly, Rabbi Geoffrey Haber’s son enthusiastically high-fived his mother after completing a difficult-to-memorize passage during his Bar Mitzvah. Rabbi Haber said Noam’s high-five was simply another way of showing that “the sacred opens up in new ways.” (A nice turnabout for the Haber family, who were once asked not to bring Noam to a Canadian congregation any longer after he once shouted during a service.)

Like Fisher, Rabbi Haber had a funny and moving story about his son learning to ride a bicycle, which imparted a strong message to the man of faith: “don’t prejudge what my child can do, let them set their goals and show us the spirit of God within them.”

The conference had a deep personal meaning for nearly all in attendance. John Tognino has a grandson with Aspergers syndrome, a separate category of PDD, according to the Autism Society of America.

“It was a good opportunity both to educate the general public and advocate for those who have autism or any special needs,” Tognino said. “It’s part of the work we can do as Catholic educators.”

Lance A. Strate, Ph.D., associate professor of communication and media studies at Fordham, hoped to help fellow parents. “This was an opportunity for all different groups to come together to talk about ways to make things better for our children,” said Strate (his daughter Sarah, 11, has autism). “There was a lot [my family]had to figure out for ourselves and now we can help other people learn the ropes.”

One parent who found some answers was Deborah Matos, who sported the multicolored ribbon that many parents of autistic children wear, a symbol of “unlocking the puzzle.” She has known Fisher and Chew through the Internet for many years, calling them “real trailblazers.” Like some attendees, Matos was happy that the conference addressed faith-based issues for autistic persons and their families.

“Religion is very important to me, “ said Matos. “I’d like to see more meetings like this with the religious aspect to it. I don’t know if my son will have the same [religious]experience I have, but he will have it in his own way.”