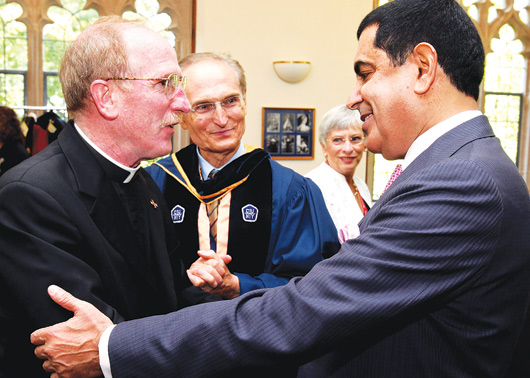 Fordham conferred an honorary degree upon the outgoing head of the United Nations General Assembly, His Excellency Nassir Abdulaziz Al-Nasser, in a ceremony held Sept. 12 on the Rose Hill campus.

The conferral of a of Doctor of Laws, honoris causa, upon Al-Nasser, a tireless champion for the peaceful settlement of disputes through resolution, was doubly poignant given the tragic attack on the U.S. Embassy in Libya just a day earlier, said Joseph M. McShane, S.J., president of Fordham.

“It is an honor beyond words that you are with us this afternoon,” said Father McShane. “On this day, when the world will be focused on Libya, it is vitally important for Fordham to stand up in the face of horror and affirm the goodness of one heart, and the untiring work you have done for peace and justice throughout the world.

“It is a great grace to hold you up for all the world as an example to be looked to and followed,” he said. “You have shown us truly the way to peace, the way to dialogue, the way to conversation, the way to building up the human family.”

Al-Nasser was elected as president of the U.N. General Assembly’s 66th session on June 22, 2011 and assumed presidency on Sept. 13. In his year of service, he has worked to advance international peace and security, sustainable development, international disaster response, and to revitalize the Assembly’s critical role in advancing these causes.

A native of Doha, Qatar, Al-Nasser served as the state’s ambassador and permanent representative to the United Nations from 1998 until 2011. In this capacity, he served as chairman of the General Assembly’s Special Political and Decolonization (Fourth) Committee, president of the General Assembly High-Level Committee on South-South Cooperation, and chairman of the Group of 77 and China at the United Nations in New York. Prior to that, Al-Nasser served in diplomatic posts in Beirut, Pakistan, and the United Arab Emirates.

In December 2006, while serving as president of the U.N. Security Council, Al-Nasser led the council as it took action to fight terrorism and protect journalists in armed conflicts.

Al-Nasser’s diplomatic appointments took him into war-torn neighborhoods, African refugee camps and, recently, through the post-Gaddafi devastation in Libya.

“A diplomat’s constant effort, often behind the public glare, is to search for peace where there is war, to find a solid basis for consensus, for mediation, and, even better, for the prevention of conflicts,” he said, accepting the honor.

Al-Nasser praised the alliances between scholars and those working in the field, characterizing programs such as the IIHA as mechanisms that can “overcome cultural barriers and result in a civilization that unites, rather than divides.”

“Let us resolve, scholars and diplomats, to work for the advent of a better world,”
he said.

Following the completion of his U.N. term, Al-Nasser will begin serving as IIHA’s Diplomat-in-Residence.