Fordham University has become one of 16 universities worldwide approved to work with the United Nations as a nongovernmental organization (NGO) helping to raise public awareness about UN-sanctioned activities and global issues.

In its newfound role, Fordham will maintain an association with the UN Department of Public Information (UNDPI) to promote the work of the United Nations through publications and campus activities, and keep the UNDPI’s nongovernmental organization relations section informed of any relevant activities it undertakes. 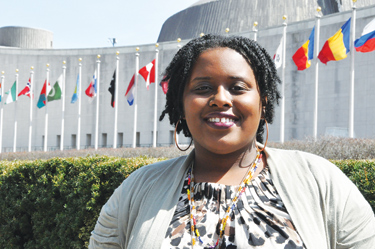 GSS student Anjanae Wilson has benefited from Fordham’s relationship with the United Nations, acting as a youth representative for a Belgium-based NGO, Close The Gap. Under a new Fordham-UN association, more students will have a chance to do the same.
Photo by Janet Sassi

In exchange, the association brings a wealth of programming opportunities and special access for Fordham faculty and students, including attending weekly UNDPI-NGO briefings at the United Nations. It also provides students special access to NGOs associated with the United Nations that could result in internships and other UN-related experiences, said Kelly Roberts, assistant director and university Student and Exchange Visitor program coordinator in the Office for International Services.

“Fordham the first institution in New York City to receive the UNDPI association university-wide,” she said. “We’ve already had global leaders on our campus and enjoyed a positive relationship with the UN, so formal association is the next step. It ties together all the programs Fordham has been doing over the years.”

In the past, the University has worked in tandem with the United Nations to host various heads of state—including President Evo Morales of Bolivia and Leonel Fernández, president of the Dominican Republic. Last year the University presented an honorary degree to the leader of the 66th United Nations General Assembly, His Excellency Nassir Abdulaziz Al-Nasser.

As an associated NGO, a designated representative of Fordham to the United Nations will be granted grounds passes to enter the UN headquarters in New York City for a variety of purposes, including:

• attendance at any open meetings of UN bodies;
• participation in weekly NGO briefings organized by the NGO relations section;
• participation in orientation programs provided for new NGOs;
• invitation to an annual UNDPI/NGO conference, and;
• access to the associated NGO databases.

Two other American universities that hold NGO association status include Lehigh University in Pennsylvania and Fairleigh Dickinson University in New Jersey.
Since the United Nations links security, development, and human rights together in its efforts toward building world peace, its mission fits nicely with Fordham’s social justice mission, said Roberts.

Graduate School of Social Service (GSS) student Anjanae Wilson has already benefited from the UN-Fordham relationship. Since last October, Wilson has been the designated UN youth representative for the Belgium-based NGO, Close the Gap, whose mission is to provide information and communication technology to developing countries.

In her role as the NGO’s New York-based advocate, Wilson makes weekly trips to the UN to help facilitate business for the NGO, which refurbishes donated computers and machinery from businesses and organizations and distributes them to worthwhile NGO-sponsored projects around the globe. Recently, Wilson helped narrow the “digital divide” between developed and newly developing countries by putting the founder of a Latin American technology school for girls in touch with her NGO’s reps, who will help fill the school’s computer needs.

“Working at the UN gives me a chance to learn international social development from the inside out,” said Wilson, whose area of focus is global social work.

“Before I started this relationship with Close The Gap, I didn’t think of technology in terms of social work or social justice. But I see how important it is to empower individuals in these developing communities.

“We have access [at the UN]to so many meetings, events, and offices that it is broadening my horizons as a global social worker. It’s a great opportunity.”