skip to main content
Return to Fordham University
You are at:Home»Colleges and Schools»Gabelli School of Business»Fordham Foundry Opens its Door to the Bronx

The Fordham Foundry, a collaborative program between New York City’s Department of Small Business Services (SBS) and the Fordham Schools of Business’ Center for Entrepreneurship, welcomed friends, students, community members, and partners to an open house on March 20. 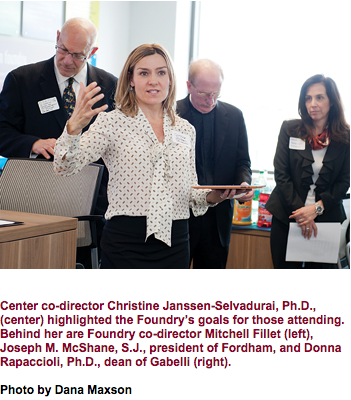 The gathering was held at a 30,000-square-foot facility adjacent to Fordham’s Rose Hill campus that combines in a single location the Foundry, NYC Business Solutions services, and Workforce1 Career Center services for job seekers.

Joseph M. McShane, S.J., president of Fordham, said the Foundry, which is part of the Gabelli School of Business, is a great example of how the University is recommitting itself to the Bronx.

From the offices’ 7th-floor, north-facing windows, Father McShane pointed out Montefiore Medical Center, 1.5 miles away yet easily visible as the host of Fordham’s WFUV radio station antenna. The medical center is also close to Mosholu Parkway, where fashion icons Ralph Lauren and Calvin Klein both grew up. They are examples of the entrepreneurial spirit of the borough that the Foundry hopes to tap, he said. 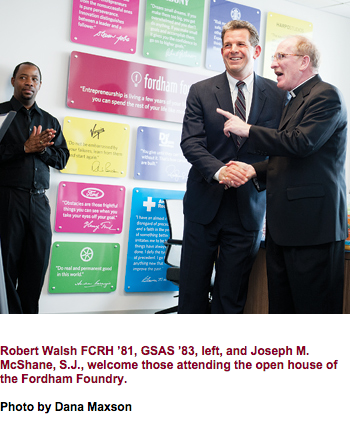 Center co-directors Christine Janssen-Selvadurai, Ph.D., director of the entrepreneurship program at Gabelli, and Mitchell Fillet, lecturer in finance in the Schools of Business, also spoke, with Janssen-Selvadurai highlighting the Foundry’s goals:

• to support the Fordham community in developing and launching businesses;
• to create businesses that remain in the Bronx and spark economic growth
and job creation;
• to serve the greater Bronx community of entrepreneurs.

Donna Rapaccioli, Ph.D., dean of Gabelli, introduced three entrepreneurs at the gathering who are working with the Foundry to develop successful businesses, including Rhona Silver of CaterBid, which catered the event.

“What comes to my mind is the word promise, because every time I’m in this space, I think about the promise that each of our students has,” Rapaccioli said.

“We are a college town. How can colleges and universities open their doors to make our city a better place? As he always does, Father McShane said it’s a shared value, not only what we need from the community, but what the community needs from us,” he said.

“We’re all in here together, and we could end up building something powerful.”