Three players on the Fordham University football team have been honored in the first two weeks of the season.

Fordham opened its 125th Anniversary season on Sept. 1 with a thrilling 27-23 win over the University of Rhode Island in Kingston, R.I., as quarterback John Skelton hit Jason Caldwell with a nine-yard touchdown pass with 15 seconds left in the game. The win was the first opening-day win for Fordham since 2003.

Allen, who was named Patriot League Special Teams Player of the Week once last year, led the Fordham defense with 11 tackles, including a sack. He also intercepted a pass on the one-yard line, thwarting a potential Rhode Island scoring chance, and returned it 28 yards while also returning two kickoffs for 49 yards.

Abdul-Quddus had a huge collegiate debut, recording nine tackles, including a team-high three for a loss along with two sacks.
In Fordham’s 23-20 loss to the University at Albany on Sept. 8, Loucks recorded a career-high 26 tackles. The 26 tackles are an unofficial school record and are just two shy of the Patriot League record set in 1990 by Lehigh’s Lee Picariello against College of William & Mary. 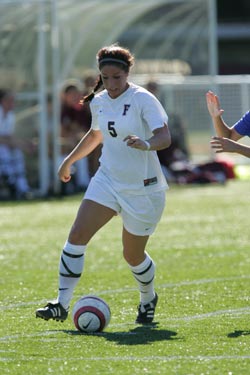 Football hasn’t been alone in garnering weekly honors as volleyball and women’s soccer have also picked up player of the week awards over the first two weeks of play.

For women’s soccer, junior forward Katie Sanchezwas named Atlantic 10 Women’s Soccer Co-Player of the Week for the week ending Sept. 9. This is Sanchez’s first weekly honor this season and fourth of her career.

Sanchez continued her stellar start to 2007, notching a goal in each of Fordham’s contests on the week. She scored the game-winning goal in overtime at Lafayette College, and then followed with a goal at Manhattan College in a 1-1 tie.

Sanchez currently leads Fordham with three goals and six points this season, and has climbed up the Fordham career scoring lists, ranking fifth in career goals (21) and fourth in career points (52).

Griffiths had an outstanding week for Fordham, hitting .377, while averaging 3.90 kills and 1.33 blocks per game. She posted at least 16 kills in all five matches during the week. She opened the week by hitting .548 against Iona College with a season-high 18 kills and four blocks. She was then named to the All-Tournament team at the Western New York Invitational. 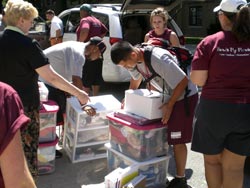 On the day after an exhilarating opening day win at the University of Rhode Island, one would expect that the Fordham University football squad would be sleeping in and savoring their victory. But that wasn’t the case as a group of Rams were up and standing at the ready outside Queens Court shortly before noon to help the incoming freshmen unload their vehicles.

“The Residential Life Office helps us out in the summer when we come in for camp and this is our way of thanking them,” said Fordham head coach Tom Masella.

The football players were in charge of hauling the heavy goods, including refrigerators, televisions and cases of water, up flights of stairs, drawing praise from some of the parents who thought they would have to do the heavy lifting themselves.