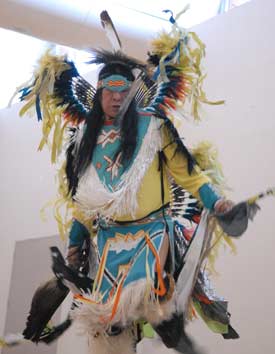 A dancer from the Red Hawk Native American Arts Council performs at the McGinley Center during Focus the Nation.
Photo by Chris Taggart

Despite the frigid temperatures on Jan. 31, Fordham’s Rose Hill campus saw “green” thanks to Focus the Nation, a nationwide teach-in about global warming solutions.

The event, which included a wide range of presentations on topics from the effect of climate change on penguins to the greening of New York City streets, featured more than 40 speakers from various disciplines.

Focus the Nation was held at more than 1,100 colleges in 50 states. As a host university, Fordham took the opportunity to examine its ecological footprint and outline its environmental goals.

“We’ve reduced our electrical consumption by 23 percent over the past 10 years,” said Marc Valera, associate vice president of facilities management for the University. “We’re changing over to green cleaning chemicals, we’re setting back our thermostats and … we’re hoping to achieve 95 percent recycling of our waste,” he added.

“Responsible stewardship of the Earth is a charge from God,” and one that comes naturally to the Jesuit tradition, Father McShane said in a pre-recorded statement to the campus community. (He was unable to attend the events.)

“At Fordham we have already begun to do our part,” he said. “The larger part of the work lies with you … to educate, inspire and move public and policy officials to act always for the common good.”

Focus the Nation was created by Eban Goodstein, an economics professor at Lewis & Clark College in Portland, Ore. and author of a widely used collegiate textbook on economics and the environment. 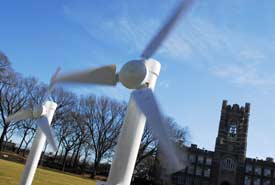 A student-built wind farm is displayed on Edwards Parade during Earth Week at Fordham.
Photo by Chris Taggart

According to an article by the Associated Press, Goodstein realized several years ago that time was running out to address global warming, so he issued a call to arms to fellow professors across the country.

“It was a communal effort,” Jones said. “The event as a whole was a success. We gave the community an opportunity to reflect on dozens of different perspectives on the array of issues involved with and touched by climate change—social justice issues, science, theology, ethics, economic policy and legal frameworks.

“Fordham, with its morally focused institutional mission, has a role to play in leading the way toward a sustainable future,” Jones continued. “And that has local overtones as well; we’re one of the single biggest employers in the Bronx.”

Presentations from local organizations, including Green Workers Cooperative, an organization dedicated to incubating worker-owned and environmentally friendly cooperatives in the South Bronx, and the Bronx River Alliance, which works to maintain the Bronx River, were part of Focus the Nation.

The day-into-night event included performances from the Rivington Jazz Project Ensemble and the Red Hawk Native American Arts Council, as well as an art and photography exhibit and Sustainability Marketplace of Goods and Good Ideas.
T
he Earth-friendly market featured Fordham Focus the Nation
t-shirts made with organic materials and “Cool Tags,” wind energy credits that people can buy to offset the carbon dioxide they generate in the course of their daily lives.
F
ordham sophomore T.K. Zellers, 19, joined with other students to build a wind farm on Edwards Parade that was on display all week.

“We had help from lots of different people, most notably Fordham Experimental Theatre (FET), who let us use their space and lent us a hand in construction,” said Zellers, president of Students for Environmental Protection and Awareness, another campus group. “FET’s cooperation really shows how inclusive this issue is; everyone has a stake in the future of the environment, and so anyone and everyone can help, no matter your interests or political views.”