skip to main content
Return to Fordham University
You are at:Home»Colleges and Schools»Graduate School of Arts and Sciences»Fordham Fetes its Funded Scholars 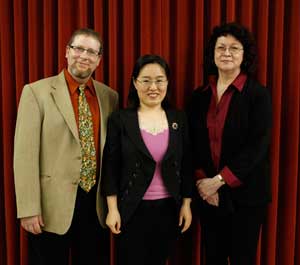 Three Fordham faculty members were honored at a ceremony on May 2 for their contributions to the University and its mission through externally funded research.

The ceremony, the second of its kind, capped a day-long event, Growing Research at Fordham! Out of the Tower: Fostering the Public Intellectual. The annual event recognizes and promotes research that elevates both Fordham’s profile, and the goals of its Jesuit-centered higher education.

Recipients of this year’s Funded Research Scholar Award were:

J. Alan Clark, Ph.D., assistant professor of biological sciences, for his numerous externally funded projects to preserve species here in the northeast, as well as his work hosted by the University of Waikato in Hamilton, New Zealand. Dr. Clark’s research in New Zealand and Australia is to determine whether these countries’ colonies of little blue penguins demonstrate enough genetic variation to warrant separating them as species, or whether they’re merely distant biological cousins — a question critical to their legal status for conservation.

Qin Gao, Ph.D, associate professor of social work in the Graduate School of Social Service, who has received funding from the Fahs-Beck Fund, New York Community Trust, and the Silberman Fund, explores issues of income inequality caused by rural to urban migration within China, as well as the well-being of Asian American families and children here in New York City. In addition to her expertise in social work and that of her collaborator in economics, Dr. Gao’s work is also inspired by her own experience of having immigrated not only from China to the United States, but also from rural China where she grew up to Beijing.

Maryanne Kowaleski, Ph.D., Joseph Fitzpatrick S.J. Distinguished Professor and director of the Center for Medieval Studies, who received a 2011 Andrew W. Mellon Short-Term Fellowship for research on the Medieval Coastal Properties of Battle Abbey, which she conducted at the presitigious Huntington Library in San Marino, Calif.  Dr. Kowaleski’s current project, and this award, are the continuation of a diverse interdisciplinary research agenda that has placed Medieval Studies under the lens of gender studies, analyses of commerce and trade, and at the forefront of digital humanities.

Faculty members received their awards from Nancy Busch, Ph.D., dean of the Graduate School of Arts and Sciences (GSAS) and the University’s chief research officer.

In presenting the awards, Dean Busch referred to Fordham statutes that cover the importance of research as leading to “the creative expansion of the teacher’s vision,” the training of students in “scholarly inquiry, “ and the fulfillment of “the university’s responsibility to expand the horizons of knowledge to the ultimate benefit of society.”

“At Fordham, I think we do it for a slightly different reason,” Busch said. “Within Fordham’s Jesuit tradition, we believe that research has a special role in serving the greater good. We acknowledged that knowledge applied is crucial in addressing the ills of today’s society, whether related to human misery versus human dignity, or part of environmental degradation versus protection.”

The winners were chosen from a pool of 88 faculty, whose eligibility was determined by having been cited in one of Fordham’s past three annual President’s Letters for having received a new award of external funding in support of their research.  Over 300 almunai, faculty, students and staff then responded the University’s call for nominations from amongst this pool for one award in each of three categories: Humanities, Sciences, and the Social Sciences & Professions.

James Wilson, director of faculty development, said that the nine finalists—three in each category—were identified in consultation with the Office of Sponsored Programs and in accord with a weighting process for these nominations devised by the University Research Council (URC) in order to consider peer commentary, project impact and longevity of funding, among other factors.  Each member of the URC then considered the nine finalists’ career research contributions and/or demonstrated potential before forwarding his or her individual choice to receive one of these three coveted awards.

The final three were chosen by members of the URC, each of whom made his or her individual selections independently.
The remaining finalists were:

Thierry Rigogne, Ph.D., associate professor of history, funded by the American Society for 18th Century Studies, the Library Company of Philadelphia, and the American Philosophical Society.

The celebration, which was sponsored by the Office of Research, was held at the Rose Hill campus. It included a presentation and workshop by the OpEd Project, a pilot project with universities to help increase the number of women’s and minority men’s voices on the op-ed pages of major publications. The workshop was run by project’s founder and director, Catherine Orenstein.