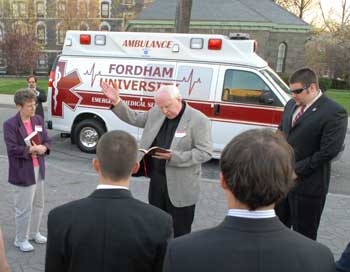 Two feet and a fanny pack full of bandages.

That was the full array of medical resources used by Fordham’s Student Emergency Response Group (SERG) when it opened in 1977.

The feet belonged to Bruce Nedelka, CBA ’79, a first aid buff from Long Island who pioneered the idea of a student-run emergency medical squad on the Rose Hill campus.

On Friday, April 18, the group—now known as the Fordham University Emergency Medical Service (FUEMS)—marked its 30th anniversary with a celebration and reunion. Nedelka, who gave the keynote address, praised the current membership for advancing the spirit of caring for others that has been present since the early days of SERG.

“With so many people in college thinking only of themselves and their futures, you are truly the embodiment of the spirit of service that exists at Fordham,” he said.

More than 155 alumni and friends watched Joseph Currie, S.J., director of campus ministry, christen the squad’s new “Ram-bulance,” a General Motors Traumahawk K5, before enjoying a night of dining and reminiscing in the McGinley Center Ballroom.

“When I came to Fordham, there was a 45-minute ambulance response time, on average, in the Bronx,” Nedelka recalled. “Without an on-campus emergency response unit, a visiting theologian suffered a fatal heart attack before he was scheduled to lecture.”

When a medical emergency at Homecoming in 1977 resulted in a 55-minute ambulance response time, Nedelka took it on himself to carry medical gear from class to class in a modified fanny pack in case someone needed help.

The organization grew, and the University recognized SERG as a club in 1981. Seven years later, the group officially registered with the State of New York and joined the National College EMS Foundation.

Today, each FUEMS crew is led by a certified emergency medical technician, and every member goes through a month of training at Our Lady of Mercy Hospital in the Bronx or Westchester Community College. It recently completed its most successful membership drive in club history.