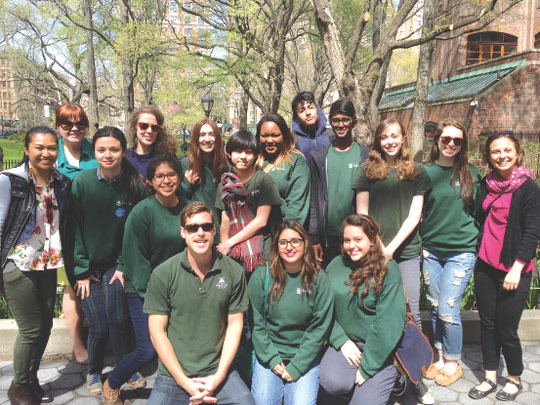 Chelsea Butcher (second from left, in sunglasses) poses with the teens at the
Museum of Natural History.

With two prestigious institutions—the Bronx Zoo and the New York Botanical Garden—sitting across the street from Fordham’s Rose Hill campus, it would seem like a no-brainer to get students involved at them.

That’s certainly how Amy Tuininga, Ph.D., associate professor of biology, sees it.
Tuininga, the associate dean of strategic initiatives, partnerships, and assessment at the Graduate School of Arts and Sciences, said that she first broached the idea of getting students to do research and teaching with the zoo when she spotted a talented doctoral candidate who had more than a dash of initiative.

“It seemed like he had potential to innovate teaching in nontraditional settings,” Tuininga recalled.

Eventually, the doctoral candidate, Jason Aloisio, worked with Tuininga and Karen Tingley, the city zoos’ director of education, to found Project TRUE (Teens Researching Urban Ecology). It is a tiered mentoring program that works with faculty, undergraduates, and graduate students to teach city kids about urban ecology. The program, sponsored by the Wildlife Conservation Society, was adopted by the Central Park Zoo and even found its way into city parks.

“For many of these kids, reality is a dirty sidewalk and natural areas are perceived as places where you can get mugged,” said Aloisio. “We’re trying to dispel that perception.”
With the success of the zoo relationship established, Tuininga introduced doctoral candidate Chelsea Butcher to James Boyer, Ph.D., the Marian S. Heiskell Vice President for Children’s Education at the New York Botanical Garden.

The garden’s youth program differs from the zoo’s in that it primarily engages teens who already have an interest in urban ecology. These teens are brought in as “teen explainers” to teach kids ages 3 to 10 about plants in an informal manner at the Everett Children’s Adventure Garden. As the teens gain experience and knowledge, they can move on to become “advanced explainers,” said Boyer.

“They all have a passion for the work and it teaches them self-confidence,” he said. “They don’t join the program because they were urban kids without a connection to nature or science. They’re committed.”

The advanced-level explainers get to meet up with Butcher. Boyer said that even though his staff brings plenty of child-studies and educational experience to the table, in Butcher they found someone who can teach plant science as a practice.

“She is constantly correcting misconceptions and gives them a realistic sense of science through experiments,” he said.

Butcher’s background is in urban ecology. She loves field research, but the harsh winter of 2013-14 kept her and the cohort housebound in the garden’s Haupt Conservatory and the laboratory. Beginning in March, she and the teens ran experiments that focused on the adaptation of plants in both rainforest and desert environments. Sample plants from both environments were given water in varying amounts and at varying frequency. Each week the students counted and measured the leaves, and observed whether a plant was getting sick or benefiting from its particular water regimen.

The students presented their observations at the YouthCaN World Conference held at the Museum of Natural History on April 28. The conference brings together students from around the world (in person or via video) to do research presentations about the environment.

Instead of a dry show-and-tell, the garden team presented a sci-fi-infused video intended to capture the attention of their fellow teens. They also presented information they learned from Butcher on ethnobotany—the study of human use of plants for things like food or clothing.
Following their presentation, the teens also implemented a plan to do qualitative research to measure if their lab training paid off.

For this, Tuininga drafted yet another doctoral candidate—this time from Fordham’s Department of Psychology. Sheena Jeswani helped the students develop a survey that will evaluate visitors’ experiences at the Everett Children’s Adventure Garden. When the students complete their 120 hours of internship, they’ll have data that shows whether their research helped improve their skills as explainers. The survey will also teach the teens the difference between quantitative and qualitative research.

While the teens walk away learning a lot, so, too, do the doctoral candidates. Butcher, who just won a Claire Booth Luce Fellowship, said the experience has made her a better scientist.

“As scientists, we get focused on our area and it gets difficult to communicate with people outside of our field,” said Butcher. “But with these teens I have to think about how do I get them excited, and that makes me excited.”