skip to main content
Return to Fordham University
You are at:Home»Inside Fordham»Fordham Defensive Lineman’s Life is a Book 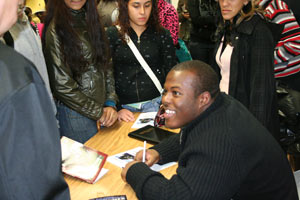 Countless student-athletes have signed autographs for fans. But not many have signed a book about how they overcame adversity. Included on that short list is sophomore defensive lineman Thomas Lloyd III.

Lloyd, who goes by the nickname “T-Lloyd,” addressed students from seven Bronx high schools on Oct. 27 on the importance of staying motivated, giving a consistent effort and setting goals.

The event was sponsored by Scobre Press and the RETC 21st Century Learning Center, a new University-run center that aims to increase the tech savvy of families in the Bronx while helping students further their educations.

Lloyd is uniquely qualified to speak to students about overcoming adversity. His family left their home in New Orleans just prior to the landfall of Hurricane Katrina. But Lloyd’s father, Thomas Lloyd Jr., stayed behind to look after the house. After Katrina hit, the Lloyd family was unable to get in touch with the father, who spent part of the time on the roof of his house, for almost two weeks.

“Dad was being stubborn,” Lloyd said. “We were all worried because we followed the events on television and couldn’t get in touch with him. When he finally called, I remember running to the phone and hearing his voice. We were so relieved.”

The story of Lloyd’s Katrina ordeal and his efforts in the fiercely competitive world of Texas high school football were chronicled in the book, T-Lloyd: In the Trenches (Scobre Press, 2008).

“It was a shock to me that someone would be interested in my life,” Lloyd said. “The publishing company contacted my school and my parents. One day, I saw my parents at school. I thought I was in trouble, which was odd because I never got in trouble at school. That night, my parents told me about the book and all I could say was ‘Why?’”

In speaking to the students, Lloyd used his experiences to promote hard work and perseverance. He emphasizes those messages as a volunteer at the learning center, which is operated by RETC: Center for Professional Development. The center began offering technology classes and other services this past September, helping students who are behind in credits get back on track for graduation.

“It’s all about effort,” said Lloyd who wrote “Give an Effort” in each of the books he signed. “Once you put in a little effort, it can get you over the hump. I’ve seen most of you come to the program every day and work hard to achieve your goals of getting your credits. That motivation needs to be with you every day.”