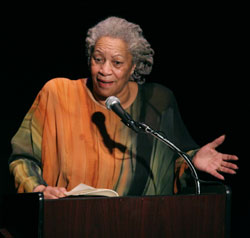 Fordham University co-hosted an appearance by Toni Morrison, author of nine novels, winner of the Pulitzer Prize and first African-American woman to be awarded the Nobel Prize, on March 27 at New York University.

Morrison, the Robert F. Goheen Professor Emerita at Princeton University, was on hand to celebrate the publication of the biography of African-American activist Ida B. Wells, Ida: A Sword Among Lions, Ida B. Wells and the Campaign Against Lynching (HarperCollins, 2008).

The book’s author, Paula J. Giddings, Ph.D., the Elizabeth A. Woodson 1922 Professor in Afro-American Studies at Smith College and one of the nation’s leading scholars of African-American women’s literature, also was honored.

Morrison paid tribute to Giddings’ work for its insight into both Wells and the era in which she struggled against a multitude of forces seeking to silence her voice and her social causes. Wells, a journalist who was active at the turn of the 20th century, was an outspoken crusader against lynching, racial injustice and women’s inequality. Her acts of civil disobedience made her the center of frequent controversies.

“I have a long and deep affection for outlaw women,” Morrison said. “I don’t think I ever wrote a book which did not have at least one woman always pushing the boundaries of behavior and thought.”
I
da B. Wells, Morrison said, was such a woman. “She was a little too honest. She really meant what she said. Ida Wells’ life was big,” she said.

Nicola Pitchford, Ph.D., professor and chair of Fordham’s Department of English, said that co-sponsoring the event enabled Fordham to expose its graduate students to some of the day’s most prominent scholars. The event was hosted by the National Council for Research on Women (NCRW).

“Fordham was one of the first, if not the first, colleges to institute a Department of African-American Studies,” Pitchford said. “[We] saw this as a remarkable opportunity.”