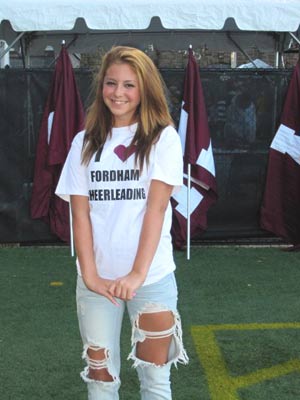 Meaghan Tully, who was diagnosed with germinoma brain cancer, has been adopted by the Fordham cheerleaders.
Photo courtesy of Fordham Athletics

The night of Sept. 19 was special for 14-year-old Meaghan Tully.

That was the night the Pearl River High School freshman got to see her first college football game. It was also the night that she officially met her adopted team, the Fordham University cheerleaders.

Two years ago, Tully and her parents weren’t sure if she would get to see her next birthday, much less her first college football game. At the age of 12, Tully was diagnosed with germinoma brain cancer. She underwent a biopsy that was followed by chemotherapy and radiation therapy in Boston. The treatments lasted two to three hours and caused her to be nauseous and lose her hair.

“People ask me all the time about how I felt during the treatments and I really don’t remember much,” Tully said. “I only really remember being sick a lot and laying on the floor since it felt better than being in bed.”

Once Tully finished the treatments, she returned to Pearl River, but had difficulty getting back to a “normal” life. She had challenges at school since she missed all of fifth grade due to the treatments, and was very self-conscious about her hair loss.

Luckily, the treatments seemed to have worked and now she is doing fine. During her recuperation, Tully contacted the Friends of Jaclyn Foundation (FOJ), a charitable organization that improves the quality of life for children with pediatric brain tumors.

The group matches a child with a college or high school sports team based on geographic location. Once the team and child have been matched, there is a ceremonial adoption. The child is surrounded by new friends who rally around him or her. A bond is formed between the child, the child’s family and the sports team.

Last summer, Fordham’s head cheerleading coach, Jennifer McCarthy, contacted FOJ about adopting someone who was interested in cheerleading. The timing was perfect, as the foundation had Tully’s request to be paired with a cheerleading team, and the wheels were set in motion. It turns out that she is the first child from FOJ to be adopted by a cheerleading team.

Members of the team reached out to Tully and friended her on Facebook. Arrangements were made for Tully and her family to join the team at the football home opener, where she was joined by Angela and Danny Lam from FOJ. The Lams’ daughter, Devon, was adopted by the Temple women’s lacrosse team in February 2008. Unfortunately, she succumbed to the disease that December.
“
We love coming to these events and seeing the joy on the faces of the kids,” Danny Lam said. “But it’s just as much for my wife and me. When we lost Devon, we could have easily just given up and gotten angry. But we decided to channel our energy into the Friends of Jaclyn Foundation and help ourselves by helping others.”

Even though Fordham lost the game to Columbia, one young Ram fan left the contest with a lot of memories, not to mention a bunch of new friends.

“I’m having a great time,” Tully said during the game. “The women on the team are like big sisters to me and I always wanted a big sister. We keep in touch all the time on Facebook. They help me with some of the problems I have and are just great friends.”