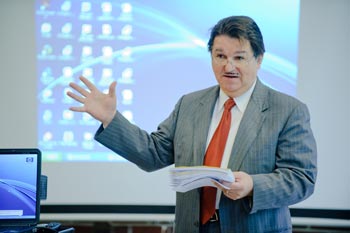 Experts on development, transportation, conservation and urban planning gathered on Oct. 6 at the Lowenstein Center at Fordham to share ideas about how to make cities around the world greener and more welcoming.

The forum, “Green Cities of the 21st Century: Harmonizing Natural and Built Environments,” was presented in conjunction with the United Nations’ World Habitat Day, which occurs annually on the first Monday of October. While the global observance took place in Luanda, Angola, forums like Fordham’s were organized around the world.

The theme of this year’s program was “Harmonious Cities,” and from the very beginning, organizer Harold Takooshian, Ph.D., professor of psychology, predicted that it would be an optimistic gathering, rather than a recitation of well-known urban ailments.

“Now the good news; here in New York City, we sit in what some not only regard as the world’s greatest city, but the greatest city in the history of the world,” he continued.

The experts—who addressed the forum in 10-minute blocks—touched on subjects both concrete and conceptual. While Susan D. Kaplan and Louis Nowikas touted the progress of green building in Battery Park City and the Hearst Tower, respectively, Julie Newman, Ph.D., director of sustainability at Yale University, talked about the roles that universities play in promoting sustainability.

Ellen D. Grimes, an architectural designer and assistant professor of architecture at School of the Art Institute of Chicago, detailed her plans for ecological experiments at Midewin National Tallgrass Prairie, a 19,000-acre preserve opened in 1996 by the U.S. Forest Service at the former site of the U.S. Army’s Joliet Arsenal.

“We have to develop a very different sensibility about green. It’s not about the natural versus the artificial. It’s about the artifice in nature, and the way that it changes itself over time, and that dynamism is something we hope to capture in the projects at Midewin,” she said.

Rich Sanford, a representative to the United Nations, New York at Instituto Qualivida, meanwhile, delighted participants with television commercials of the 1972 Honda Z600, a precursor to the Smart Car, of which he is an avid proponent and the use of which he said should be considered when rethinking transportation issues.

“It’s optional; it’s possible, and rather than vilifying just for the fact that they’re vehicles, I think that we can embrace them and resituate them,” he said.