skip to main content
Return to Fordham University
You are at:Home»Inside Fordham»Fordham Celebrates its Devoted and Creative Staff

Twenty-eight dedicated employees were feted on March 4 for their longstanding service to Fordham at the University’s 2012 convocation. 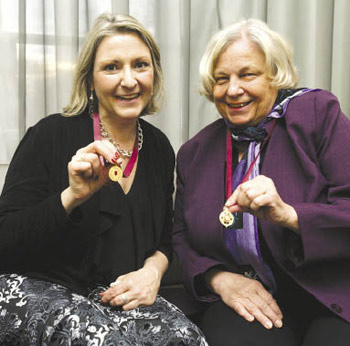 A special award for outstanding contributions to the University, the Sursum Corda, went to three employees: John Algieri, director of budget development, Susan Santangelo, director of faculty administration at Fordham Law, and John McDonagh, foreman in Facilities Operations at the Lincoln Center campus.

Collectively, the employees have given nearly 650 years of service to Fordham, said Monsignor Joseph G. Quinn, vice president for University mission and ministry.

Some awardees have spent most, if not all, of their careers at Fordham. Santangelo began as a clerical worker in the Law School in 1960. Algieri, who began as a grant accounts officer 36 years ago, now directs the University’s budget development, where he has helped to create 30-plus consecutive balanced budgets for the University.

In giving tribute to the employees’ service, Joseph M. McShane, S.J., president of Fordham, invoked two favorite texts: a biblical passage from 1 Peter 2, and another text describing the reconstruction of the foundations of  York Minster cathedral in England.

St. Peter, he said, exhorted his audience to, “Like living stones, be yourselves built into a spiritual house.”

In the York Minster text, the author reflected on how the foundations of the old cathedral, unseen for centuries, had sturdily supported the work of God.

“Many of the men and women that we celebrate today labor quietly day by day to support the University and its students as we labor together in the vocation that we all share,” he said. “Their contributions are largely hidden from view. But like the foundations of a cathedral, they are absolutely essential to our mission.” 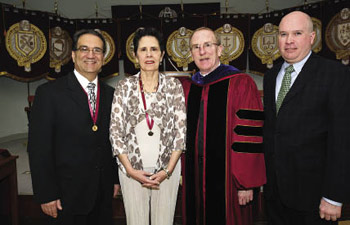 On a lighter note, Father McShane singled out Archbishop Hughes medalist John Carroll, associate vice president for safety and security, whom he said he has known since his formative years: As a young beat officer patrolling in the 34th Marble Hill precinct some decades back, Carroll had more than once confiscated the young McShane’s stickball bat.

“I’m afraid my mother went to her grave wondering where all those bats went to – they were broom handles, which my mother had to go out and replace . . .”

Archbishop Hughes medalist Eva Patton, administrator of the Theatre Program, and associate clinical professor of theatre, said working at the University had enriched her life. “Watching the theatre program develop over the years into what it is today has been one of my greatest joys,” she said. “Also, as an actor, administrator, director and a teacher, having an employer that has allowed me to wear all of those different hats has been very fulfilling.”

Bene Merenti medalist Joan Roberts, Ph.D., professor of chemistry, said Fordham had allowed her to be “very creative” as a teacher for 40 years.

“When I came to Fordham, I had just gotten my Ph.D., and now my research is internationally known. I’ve grown as both scientist and teacher.”

“Fordham has allowed me to combine the two loves of my life—the life of the mind, and the life of the spirit. It has supported my work outside of the University teaching at Sing Sing prison and being a pastor of a Queens church,” he said.

Lizzette Perez-McNab, payroll supervisor, Office of the Controller, spoke of the mentoring she received in her 20-year career. “I was young when I started. In the beginning it was a challenge, moving from sales to a Jesuit school. But people helped me along the way to move up from clerk to supervisor. I have enjoyed every minute of my time here.”

The event was sponsored by the Office of the President.