Joseph M. McShane, S.J., president of Fordham, has announced the completion of a historic capital campaign that raised $540 million for the University.

At the annual Founder’s Award dinner, held in the Waldorf Astoria Grand Ballroom on March 31, Father McShane said that Excelsior | Ever Upward | The Campaign For Fordham was the most successful fundraising effort in University history.

“If you wonder who is responsible for the achievement that we celebrate this night, look around you. [It’s] you,” Father McShane said, delivering a heartfelt message that 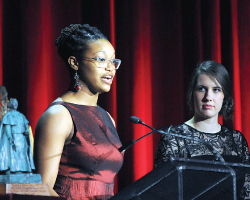 resonated well beyond the ballroom. “Each of you and all of you and 60,000 others, all of you have propelled us across the line. And you have given it from the heart. You have all raised the Old Maroon on high, for the greater glory of God.”

Launched publicly in 2009, in the midst of an economic downturn, the campaign nevertheless closed well ahead of its half-billion-dollar goal. The funds will support scholarships, endowed chairs, facilities, and other initiatives across the University (see story below).

Making the announcement to 1,000 attendees at the Thirteenth Annual Founder’s Award Dinner and Campaign Close Celebration, Father McShane cited the late Irish poet Seamus Heaney, who invoked a belief in miracles beyond hope in The Cure at Troy.

“At Fordham, history always gives rise to hope. Or, to borrow Heaney’s words, at Fordham history and hope always rhyme. Playing off one another, they create a floodtide in our hearts and make miracles come true every day.”

Father McShane made the historic announcement from a stage in the center of the ballroom. Joining him in a rendition of “The Ram” song were the Fordham University Band and Orchestra, members of the champion football and women’s basketball teams, the Founder’s Scholars, and a thousand attendees who rose to their feet.

The evening also belonged to two couples whose exemplary lives and generosity have made a Fordham education a reality for many. Receiving the 2014 Founder’s Award were 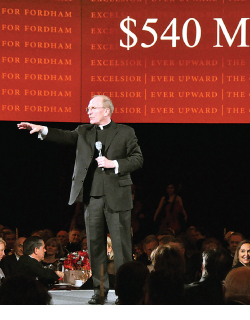 The Moores, both of whom are senior partners at Kramer Dillof Livingston & Moore, have championed victims of medical malpractice and have donated generously to educational causes. Their philanthropy created an endowed professorship at Fordham Law and supported the new Fordham Law School building, set to open this fall.

William and Linda Stavropoulos have worked in tandem to create foundations supporting economic development and youth programs in their home state of Michigan. Their gifts to Fordham helped support the renovation of Hughes Hall, site of the Gabelli School of Business.

Speaking for herself and her husband Tom (who was unable to attend), Judy Livingston Moore said that her husband’s education at Fordham Law had given him “the means to accomplish a dream and champion those devastated and disenfranchised.”
William S. Stavropoulos said that, next to his wife, Linda, Fordham had been the most “transformational” thing in his life.

“Fordham’s incredible spirit and culture instilled in me confidence and gave me an education,” said Stavropoulos, who admitted that when he arrived in the Bronx from a rural high school he was not sure he could measure up. “Some 50 years later, it is great to see Fordham University flourish.”

The $2.3 million in proceeds raised from the evening’s event will benefit the Fordham Founder’s Undergraduate Scholarship Fund. Fifteen of the scholars were in attendance to thank supporters. Dallas, Texas native Alexandria Johnson, a Fordham College at Lincoln Center senior, spoke for the group. She made reference to inspirational author Marianne Williamson’s claim that what scares us most is our own power, “our light.”

“Fordham recognized my light even before I did myself, and provided the tools and community I needed,” said the Ailey/Fordham B.F.A. in Dance student. “Thank you for believing in us.”