skip to main content
Return to Fordham University
You are at:Home»Inside Fordham»Fordham Celebrates 175 Years by Honoring its Heroes 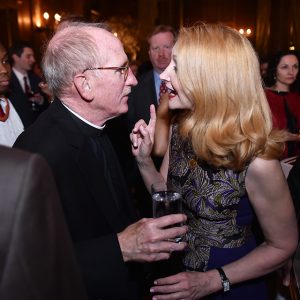 A film star.  A man whose life inspired a movie.  A groundbreaking African-American dean.  An Olympic champion.  Recipients of the Medal of Honor and the Medal of Freedom.

“These are our heroes,” said Joseph M. McShane, S.J., president of Fordham.

Father McShane was reflecting on the latest Hall of Honor inductees, who were celebrated at reception following a Mass at St. Patrick’s Cathedral on Oct. 1.

It was a heady evening, which saw well over a dozen members of the Fordham family inducted into the Hall of Honor, the Magis Society—and one very singular Founder’s Award going to His Eminence Timothy Cardinal Dolan.

In addition, the Mass also represented the fall opening celebration of the University’s Dodransbicentennial year.

“We present these honorees to the world as examples of what a Fordham education produces: men and women of exceptional talent who have pursued excellence in all they did, and who have devoted their lives to the service of others,” said Father McShane. 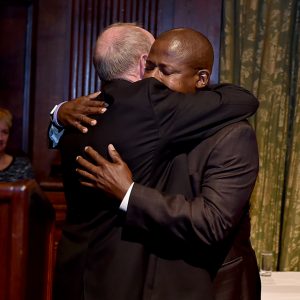 At the cathedral Cardinal Dolan celebrated the “grand marriage” of faith and reason, represented by the education many have received at Fordham. He said that, back in 1841 Fordham founder Archbishop John Hughes fully understood that Catholic education would provide the “intellectual wattage” needed in the then-young city.

Cardinal Dolan also said that knowledge obtained at the University, whether in philosophy, theology, math, chemistry, business, art, literature, or science, “speaks in some way of Jesus the word made flesh.” 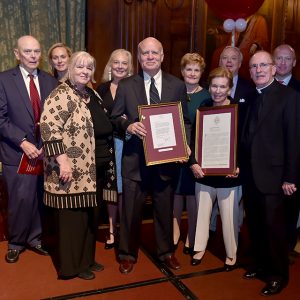 The family of James B. Donovan

A few guests noted that having the reception at the club, once solely the province of Ivy League universities, is yet another reminder of how far Fordham has come. And when film actress and honoree Patricia Clarkson, FCLC ’82, entered in a blue gown it brought its own brand of sparkle to that august institution as well.

In accepting her Hall of Honor award, Clarkson said a Fordham education had carried her through her 31-year acting career. She grew emotional when recalling her acting professor, Joseph Jezewski, who she said was the first to tell her that her “talent was limitless” and taught her how to live a “true artistic life,” which had little to do with fame and all to do with “love, passion, compassion, and truth.” Clarkson is the winner of two Emmy Awards and has been nominated for an Academy Award.

“I don’t need an academy award; I’m in your Hall of Honor,” she said.

Clarkson set the emotional tone for other acceptance speeches, which were largely delivered by family members of Fordham alumni who had passed away, including the daughter of honoree James B. Donovan, FCRH ’37. Donovan, a lawyer and naval officer, was the protagonist of the recent Steven Spielberg film, Bridge of Spies. 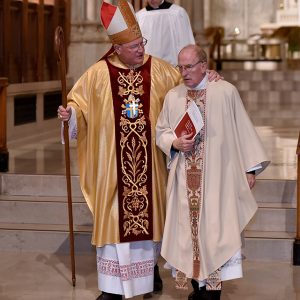 Cardinal Dolan and Father McShane on the altar at St. Patrick’s

Mary Ellen Donovan Fuller said her dad loved to hang out with the Jesuits at Rose Hill because “everybody knew the Jesuits were the intelligentsia, and dad loved that.”

J. Donald Dumpson, nephew of honoree James R. Dumpson, the former dean of the Graduate School of Social Service and first black commissioner of the New York City Department of Welfare, said that his uncle taught him how to “dream big” and how to “love those you don’t know.”

The extraordinary valor of two World War II heroes, honorees John Fidelis Hurley, S.J., FCRH 1914, and Thomas J. Kelly, UGE ’56, LAW ’62, brought gravitas to the room. Father Hurley received the Medal of Freedom from General Douglas MacArthur for his work in Philippine internment camps, where he more than once risked his life to ease the suffering of others. Kelly was awarded the Medal of Honor for rescuing 17 men on a battlefield in Germany.

John J. F. Mulcahy, Sr., of St. John’s Class of 1894, rounded out the list of honorees. He was the founder of Fordham’s rowing club, and winner of the gold and silver medals at the 1904 Olympics. Despite being active on campus well over a century ago, Mulcahy, like all the inductees, should serve as an inspiration to today’s students, said Father McShane.

“We hold these men and women up to our students to say: Here are your older sisters and brothers who have done great things. Extraordinary things. Emulate them.”

Cardinal Dolan and a few Rams