skip to main content
Return to Fordham University
You are at:Home»Inside Fordham»Fordham Campuses Recall Victims of 9/11 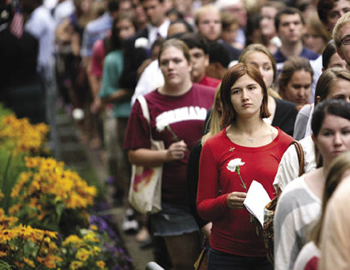 Students and other members of the Fordham community process from the University Church to the 9/11 memorial at Rose Hill.
Photo by Michael Dames

On a day when the entire country came together to mourn those lost in the Sept. 11 terrorist attacks of 10 years ago, the Fordham community marked the occasion with a full slate of memorials and Masses.

While the ceremonies on Sunday, Sept. 11, focused on remembering the 39 Fordham students and alumni who died that day, they likewise emphasized Christian messages of peace, forgiveness and love.

More than 1,500 people gathered at the Rose Hill and Lincoln Center campuses for remembrances and the Mass of the Holy Spirit celebrated by Joseph M. McShane, S.J., president of Fordham.

On what he called a “solemn and somber day for our nation,” Father McShane drew his homily from the Old Testament and the Gospel of Matthew, declaring that “living well is the best revenge.”

“God’s first impulse is always to show mercy and to act with compassion. God is quick to forgive those who forgive others and reach out in love,” he said.

At Rose Hill, the University Church was filled beyond capacity with members of the Fordham community and guests from the Security Traders Association of New York (STANY), who had attended a memorial luncheon hosted by John Tognino (PCS ’75), chairman of the Fordham University Board of Trustees.

The event honored the 44 STANY members who were killed in the attacks and another 164 who were inducted posthumously into STANY from firms such as Cantor Fitzgerald, Keefe Bruyette and Woods, and the New York Stock Exchange.

For Arthur Pacheco, a senior managing director for Bear Stearns at the time, it was a day of personal catharsis. 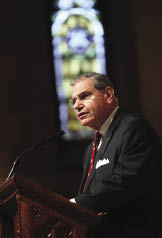 John Tognino, chairman of the Fordham University Board of Trustees, hosted a memorial luncheon for members of the Security Traders Association of New York.
Photo by Bruce Gilbert

“I hired some of those kids; they were like my own children,” Pacheco said. “We may never have closure, but we all need consolation as we continue to make sense of it.”

Tognino, the former executive vice president of global sales and member affairs at NASDAQ, described the chaos of that day and the shutdown of the nation’s trade and financial houses following the attack. He recounted the extraordinary efforts by STANY and other financial organizations—some of which lost entire offices of employees—to get back up and running.

“Hundreds of our colleagues were missing,” said Tognino, who was in Lower Manhattan on 9/11. “But the tragedy brought out the best in us. There was no shortage of heroes.”

After the Mass, a procession of alumni, students, faculty, administrators and community members led by a color guard stretched from one end of Rose Hill to the other. Those wishing to pay respects at the 9/11 memorial in Finlay Gardens carried white carnations and yellow roses along a walkway lined with American flags. Students from Fordham’s interreligious council read the names of the alumni and students who were killed that day.

At Lincoln Center, community members attended an evening Mass at the Church of St. Paul the Apostle and then walked silently to the 9/11 memorial at Robert Moses Plaza for a candlelight vigil.

In addition to a reading of the names of those who died, the people who assembled listened to Cait Hynes, a doctoral candidate in the Graduate School of Education, speak publicly for the first time about her father, Walter Hynes.

Hynes, a captain with Ladder 13, Engine 22 of the New York City Fire Department, was one of 343 members of the FDNY to die in the World Trade Center. After a decade of silence, his daughter said she decided to speak so as to better preserve his memory.

“I was only 12 years old when my dad died, but I will never forget the type of person he was and what he meant to me,” she said, noting that he was also a lawyer and an owner of the Harbor Lights Pub in Rockaway, Queens.

“Even though he was busy, he always had time for me and my sisters. He was always there to cheer us on at our soccer games, treat us to ice cream, take the family to Disney World and help me with my math homework,” she said. “My dad was the type of person who truly lived his life for others.”

Eight men in her father’s fire company died that day, and Hynes said it was important to note that the bravery and selflessness they displayed were not unusual. That knowledge—and the love and compassion shown to her by everyone from fellow community members to total strangers—has helpedtremendously, she said.

“Through the people I have met, I have come to know the bond of human love,” she said. 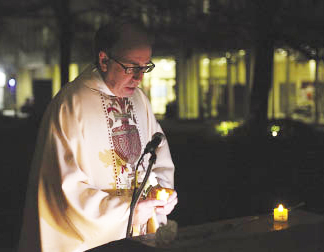 The Rev. John P. McDonagh speaks during the candlelight ceremony on the Lincoln Center campus.
Photo by Bruce Gilbert

“You will never hear me say I am glad 9/11 happened. I would give anything to see my dad again. But for all the pain and all the tears, I can appreciate the good things that came from that day. Over the past 10 years, I have met people who I may have never known otherwise—people of every color, creed, age, nationality and walk of life. Stories of their generosity and compassion are far too numerous to tell.”

At a reception afterward, Joseph Pellicone, a senior in Fordham College at Lincoln Center from Monmouth County, N.J., reminisced about the day. Although no one from his family was killed, a classmate’s father was on United Airlines Flight 93, which crashed into a field near Shanksville, Pa.

“I just remember confusion,” said Pellicone, who was in fifth grade at the time. “We saw some kids going home and not knowing the cause of it, and at the end of the day, we found out about the Trade Center going down.

“My uncle worked right near there, and I remember him telling us how he ran from the towers. My uncle has always had problems with his legs, and the fact that he was able to keep running and make it out okay is a miracle.”

Chantal Freeman, a junior from Chicago who sang in the choir at the Mass, said she needed to spend the day coming together and sharing with other people.

“It’s a time when we have to take a step back and realize how we were in the world, and how consumed we were with ourselves,” she said. “But it also brought us together—made us a stronger nation in terms of loving our country.”