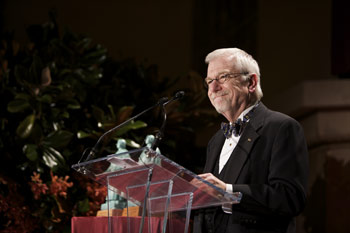 That was the record-breaking sum raised for the Fordham Founder’s Presidential Scholarship Fund by alumni and friends who celebrated the University’s tradition and excellence at its annual gala.

The seventh annual Founder’s Award Dinner on March 31 brought more than 1,000 supporters to the glitz and glamour of the Grand Ballroom at the Waldorf=Astoria.

The black-tie audience feted two of Fordham’s finest alumni—Robert E. Campbell, CBA’55, and Herbert A. Granath, FCRH ’54, GSAS ’55—and gave a big boost to the Presidential Scholarship Fund. Scholarship students in attendance spoke about the transformational experience that their Fordham education has created.

“Fordham has made me a student of the Jesuit tradition for life and has left no aspect of me unchanged,” said Michael Slagus, CBA ’08, who is enrolled in Fordham’s MBA program. “I know that I will face all of my future endeavors with the same eagerness that this school has instilled in me. ”

“I couldn’t be happier with the mix of nurture and tough love that I’ve received in the theatre department,” said Madeline Felix, a senior at Fordham College at Lincoln Center. “Thank you for your support, and for inspiring me—and all of us—to continue your efforts to make the Fordham family greater than ever.”

The evening opened with Edward Cardinal Egan, Archbishop of New York, who led the invocation and expressed his gratitude to the Society of Jesus for the outstanding Jesuit instructors he had as a student.

In presenting the Founder’s Award, Joseph M. McShane, S.J., president of Fordham, said that Campbell and Granath had inherited the “daring and dangerous” spirit of Fordham founder Archbishop John Hughes.

Father McShane said of Campbell: “We remember, celebrate and honor Bob’s remarkable career at Johnson & Johnson, and his visionary leadership of the Robert Wood Johnson Foundation. Throughout his career, he has focused on service to the human family and the protection of human dignity. Clearly, a daring and dangerous visionary.” 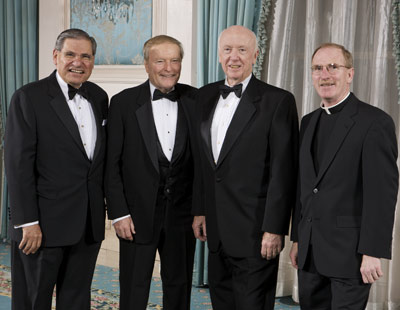 Campbell, who served as chair of Fordham’s Board of Trustees from 1992 to 1998, said that those who are blessed with health, wealth and education have an obligation to give back to the greater society.

“I remain indebted to my Fordham education,” he said. “I believe we are all indebted to those who go before us, those who nurture and teach us that which becomes part of our internal value system. And we leave a legacy for those who follow us.”

Father McShane also had words of high regard for Granath.

“He was not only present at the birth of television, but presided over the development and shaping of that medium,” he said. “Through it all, he insisted on seeing and cultivating its ethical side. Clearly a dangerous man.”

Granath, chairman of the National Academy of Television Arts and Sciences and chairman emeritus of ESPN, said Fordham played a key role in helping him choose his career, and in the way he pursued that career.

He was responsible for the creation of cable channels that are now household names, including A&E, the History Channel, Lifetime and the Hallmark Channel.

“One of the things I took with me from Fordham was a strong grounding in morality and ethics and I’ve tried to apply that to my work,” Granath said. “I helped to develop a number of cable stations and I can look back and say I’m proud to have been associated with all of them.”

Illustrating his point, Granath went on to talk about his latest project, the Hallmark Channel, which he called, “programming that you can tune into any time with your children in the room,” he said to loud applause from the audience. “All-family viewing. What a concept.”