skip to main content
Return to Fordham University
You are at:Home»Inside Fordham»Fordham Awash in Maroon During Homecoming 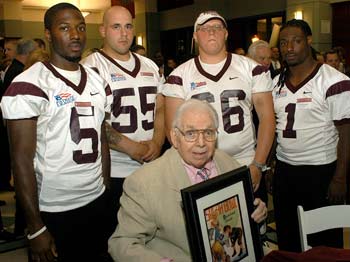 Jerry O’Brien (FCRH ’43), seated, received a framed cover of the program for the Sugar Bowl of 1942 from the captains of the Fordham football team during a banquet celebrating 150 years of Fordham football. The players are from left: Sam Orah, Michael Nardone, Michael Breznicky and Earl Hudnell
Photo by Ken Levinson

Fordham University’s Rose Hill campus was a sea of maroon as alumni and fans celebrated Homecoming and 125 years of Fordham football on Saturday, Sept. 22.

Thousand of alumni and students, clad in Fordham apparel, streamed into Homecoming Under the Tent on the Martyrs’ Court lawn before the game against the University of Dayton. Homecoming weekend also drew scores of former Fordham football players from throughout the decades, many of whom took part in the 125th anniversary celebration at the University Commons on Friday, Sept. 21.

Even a downpour before the game couldn’t dampen Garry Finkell’s spirits, as he made the trek from Albany to attend the Friday night banquet and the Saturday afternoon. Finkell (FCRH ’69) played football at Fordham from 1966 to 1967 and was struck by a football program from 1969 on display at the tent. 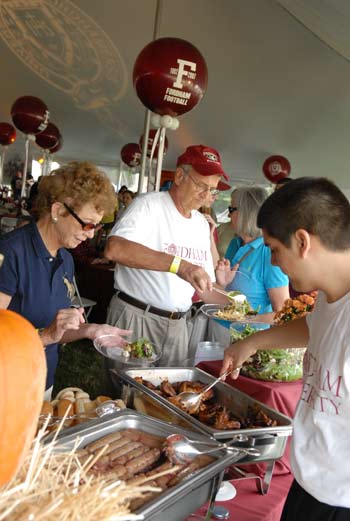 It was food, fun and Fordham at Homecoming Under the Tent, as alumni returned to campus to enjoy the weekend festivities.
Photo by Chris Taggart

“That brings back a lot of memories,” said Finkell as he took a snapshot of it. “That was the fall of 1969, the fall after I graduated. So it’s around the time I was an undergraduate here. Overall, it’s been a great weekend. I enjoyed the banquet last night … and we love coming back to campus. It’s just been a great event.”

The tent was festooned with poster-sized programs from Fordham’s storied football past, and everything from food to face painting was the order of the day for alumni and their families at the Homecoming tent.

At noon, the Fordham band and cheerleaders rallied the crowd and led alumni to Jack Coffey Field for the opening kickoff. After the game, a Homecoming Mass was celebrated at the University Church.

The football banquet on Friday night was emceed by Bob Papa (CBA ’86), the play-by-play voice of the New York Giants. Joseph M. McShane, S.J., president of Fordham, welcomed the alumni, as did Frank McLaughlin, director of athletics.

Fordham football player Dominque Owens also addressed the gathering on behalf of the team.
“We know without you, the program would not be possible and we want to take this opportunity to tell you how much we truly appreciate your support,” said Owens, who is one of five team captains. “Knowing we represent such a rich tradition and that so many great players came before us, we are reminded what an honor it is to be a Fordham Ram.”

Owens and other team captains presented the most senior Fordham football alumnus in attendance, Jerry O’Brien (FCRH ’43), with a framed print of the cover of the program for the Sugar Bowl of 1941, a game in which he played.