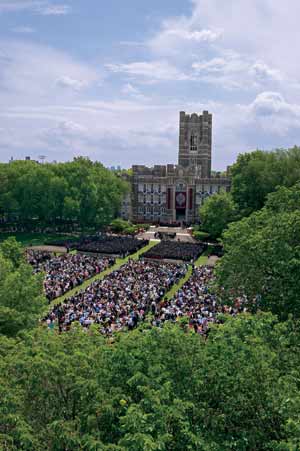 A bird’s eye view of the 2006 Commencement ceremonies on Edwards Parade. Photo by Jon Roemer

Fordham University will confer honorary degrees to the president of the New York Stock Exchange, a television executive, an archbishop, an executive at a foundation, a former justice on the South African Constitutional Court, and the longtime general manager of the Metropolitan Opera at the University’s 162nd Commencement on Saturday, May 19, on the Rose Hill campus. The University will also award an honorary degree to New York Mets manager Willie Randolph, who will deliver the keynote address to the Class of 2007.

William F. Baker has been at the head of the Educational Broadcasting Company since 1987. Under his leadership, Thirteen created the The Charlie Rose Show discussion program, Religion & Ethics NewsWeekly, and the Peabody and Emmy award-winning local series City Arts and City Life. An author and lecturer, he is a well-known advocate for the educational potential of television.

John L. Damonti has more than 20 years of experience working in the areas of health policy, community relations and philanthropy. He has been at Bristol-Myers Squibb since 1999, where he leads a major initiative known as Secure The Future, which is the largest corporate commitment of kinds to address issues related to HIV/AIDS in Africa.

Richard Goldstone served on the South African Constitutional Court from 1994 to 2003 and in the early 1990s chaired South Africa’s Commission of Inquiry Regarding Public Violence and Intimidation, which helped undermine the system of apartheid. He also served as the first chief prosecutor of the U.N. International Criminal Tribunals for the former Yugoslavia and Rwanda.

Catherine R. Kinney oversees the New York Stock Exchange’s relationship with member firms and institutions, as well as its listings business and market operations. Kinney joined the NYSE in 1974 and rose through the ranks, holding management positions in several divisions. She is a member of the boards of the NYSE Foundation, Depository Trust & Clearing Corporation, Georgetown University, U.S. India Business Council and Catholic Charities.

Archbishop Celestino Migliore was nominated Apostolic Nuncio and Permanent Observer of the Holy See to the United Nations by Pope John Paul II in 2002. Since his ordination in 1977, he has served the Vatican in Africa, Europe and traveled widely throughout Asia, and has championed the global fight against the illicit trade in small arms and light weapons, advocated for workers’ rights and people with AIDS, and campaigned against poverty.

Willie Randolph was hired as manager of the Mets in 2004 after an accomplished playing and coaching career. In 2006, he guided the Mets to a league-best 97-65 record and the National League East Division title. As a player with the New York Yankees, he was part of teams that won two World Series championships and was on the coaching staff of teams that won four more. His daughter, Ciara, a Fordham College at Rose Hill senior, will be among the graduates in May.

Joseph Volpe spent 42 years at the Metropolitan Opera, the last 16 as its general manager. His tenure as general manager is the third longest in the Met’s 124-year history, and he has the distinction of being the only person to have risen through the company’s ranks to its highest executive post. Volpe greatly expanded the Met’s international touring activities and conceived “Met Titles,” a unique system that provides title screens for audience members. He is the author of a memoir, The Toughest Show on Earth: My Rise and Reign at the Metropolitan Opera (Knopf, 2006).

The following colleges and schools will have featured speakers at their diploma ceremonies: